Satire: "A Letter from Mark Zuckerberg" 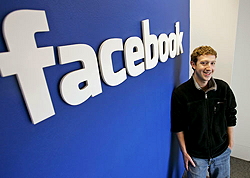 "A Letter from Mark Zuckerberg"
by Andy Borowitz

Hey it’s Mark. It seems like just yesterday that Facebook had its historic I.P.O. and, thanks to you, my net worth soared to a staggering $20 billion. What an awesome day that was for both of us. Today was a different kind of day. Facebook shares are plunging because the geniuses on Wall Street expect us to, and I quote, “make money.” That’s why your Facebook friend Mark needs your help.

Facebook only makes money if people click on its ads. Do you know what Facebook ads are? They’re those things on your Facebook page that you have never clicked on even once. But at Facebook we’re looking to change that. After doing extensive market research, we learned that there is one time when people actually do click on Facebook ads: when they’re drunk. This is the same business model that iTunes is based on. I’m sure a few of you have had the experience of using Facebook late at night, only to wake up and find that you’ve gotten seven auto-insurance quotes or enrolled as a criminal-justice major at the University of Phoenix.

Why am I sharing this information with you? Simple. If you want to save Facebook—and I know that you do—I need you to start drinking now. At Facebook headquarters, we like to have all-night coding parties where we get shitfaced and write algorithms and other computer stuff you wouldn’t understand. I want you to do the same thing, except instead of coding, I want you to click on random ads for Ancestry.com and Christian Mingle, over and over and over again. You don’t even have to buy anything—just keep clicking. And drinking.

Now, you might be asking yourself, “Why do I have to help Mark out? Isn’t Facebook’s stock price his problem?” Well, in a sense, yes. But maybe this is a good time to remind you that I have cached all of those photos you posted of yourself doing Jägerbomb jello shots at that Tri Delt party in 2007. And I’ll bet your future employers would love to take a peek at them."

Mark
- http://www.newyorker.com/
Get the Borowitz Report delivered to your inbox for free by clicking here.
Posted by CoyotePrime at 8:07 PM