"Should You Be More Interested in Mars Than the Olympics?" 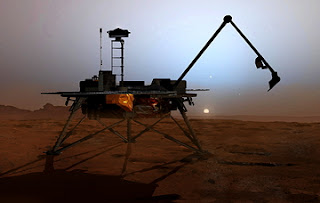 "Should You Be More Interested in Mars Than the Olympics?"
by Andrew Kessler

“This summer, if you want the world's best story of international human triumph, you'll have to look past London (even beyond the amazing hurdlers with very popular warm-up routines). You'll have to look 200 million miles away, in fact, to discover a spectacular feat of endurance more grueling than the longest ultra-marathon. You'll have to look to Mars. Yes, the planet. And the dream team that's about to land NASA's nuclear-powered super rover called Curiosity.

This one-ton, laser-beam-blasting wonder is going to land on Mars via a "sky crane." Most of us have zero idea what it does or why it's going to Mars. That's a real shame, because the Curiosity story is a modern epic of explorers on the path to discovering a second genesis. It will be a tiny blip on our summer radar - landing somewhere between the shot put finals and the Kimye engagement rumors - before it fades away without any of us ever knowing its true brilliance.

Why won't you hear about it? Because NASA isn't going to tell us. Sure, they'll tell you a little bit - press conferences about what they discovered, an inspirational video. NASA partners will create fun websites, and bits of awesome will trickle out. But there is a larger narrative tragedy, and it's a bigger conspiracy than any tinfoil-hatted crank could come up with - a conspiracy born out of fear.

It wasn't always like that. NASA used to be great at telling exciting stories. They had us with the Mercury, Gemini, and Apollo missions and their cavalier space plans and suicidal rocket jockeys. Now, not so much. They will hide this amazing story behind a sneaky cloak of boring jargon, tricking us into thinking we shouldn't care. It took them a while to get to this place, where they're so frightened of failure that they're willing to sacrifice their greatest asset: the ability to inspire. It's a damn shame. And it's keeping you from getting more excited about what's going on in outer space than on the women's hurdling track.

When I was growing up, I loved space. Maybe you did, too. I could daydream for hours about what was going on up there. But when did it become so boring? I wondered why I stopped caring. And then I got the chance of a lifetime. I spent three months hanging out in mission control on a NASA mission to Mars. Within moments of meeting the science and engineering teams, it was obvious: There is a giant gulf between the story inside mission control and the story we hear. And we never get a chance to know these brilliant characters in one of the most fascinating human dramas of all time.

You think they're hiding aliens? Really, they're hiding interesting, passionate geeks. We get glimpses of these great characters in poorly staged press conferences that make it impossible for us to actually connect with them. Occasionally, something exciting will leak out of NASA, and everyone is shocked about how cool it is - a great little movie about a landing, for instance. But, sadly, even that is a tired trope; it's the same movie we see for every mission - they're just getting better at making it. This is not the fault of the engineers or scientists, who are working relentlessly in obscurity to do amazing things. It's their fearful bosses who rob us of our best hope for inspiring a future generation of engineers, scientists, and explorers.

Next week, while we're all watching NBC, a nuclear-powered, MINI-Cooper-sized super rover will land on Mars. We accurately guided this monster from 200 million miles away (that's 7.6 million marathons). It requires better accuracy than an Olympic golfer teeing off in London and hitting a hole-in-one in Auckland, New Zealand. It will use a laser to blast rocks, a chemical nose to sniff out the potential for life, and hundreds of other feats of near-magic. Will these discoveries lead us down a path to confirming life on other planets? Wouldn't that be a good story that might make people care about science? But telling us this story means more than just the composition of the rocks (sorry, Mars geologists). It's about the team that makes it happen.

No one producing an Olympic teaser asks, "What's the importance of 100 meters?" No, they tell us about the athletes who dedicate their lives to running the race, because dedication and triumph are what make a human running 100 meters interesting. If NBC can get us all misty-eyed about 100 meters, imagine what NASA could do with 200 million miles.

The Mars race is about human survival and understanding our place in a vast and terrifyingly beautiful universe. And the stories of its athletes (mathletes?) should be world-class, because they accomplish near-impossible tasks on a cosmic scale - the hardest sport you could ever compete in. It requires dedication and doggedness that only the most passionate people in the universe could deliver. Unfortunately, this drama plays out behind closed doors. We won't have insights into the sacrifice, scandal, discovery, divorce, hardship, and drama that it takes to work for a decade delivering a one-ton super rover to another planet. It's the biggest irony that the most junior engineer at NASA is fearless in the face of trying to send a robot to Mars, but the career bureaucrats are afraid to tell that engineer's story of failure or success.

NASA will say that they're doing the best they can and stretching their education and outreach budgets to the max. But if they hope to stay in business, they need to tell us how they're pushing the limits of humanity with over-the-top, risky-ass missions that will answer questions about who we are as a species on this planet. Don't get me wrong, I love NASA. And in spite of my annoyance that they're not trying to inspire us anymore, I'd certainly quit my bitching and fall back in love the instant they went back to being the bold, brash organization they once were. All I want is for them to confront this risk of failure and tell us a story we can follow. Teach us to love the impossibly smart and quirky members of the team who lead these expeditions. Help us make them household names, so we can celebrate their brilliance.

What better time to tell captivating stories about amazing nerds? We're trendy! There's a primetime TV show about physicists. A damaged, meth-making chemist owns the cable airwaves. Take advantage and cram the wonders of science down our throats while serving heaping stories of real, live space oddities. Our future as a nation - and a planet - full of inquisitive, thoughtful, and resourceful people depends on it.”
http://www.huffingtonpost.com/
Posted by CoyotePrime at 7:57 PM