"Three Big Lies of the Super-Rich" 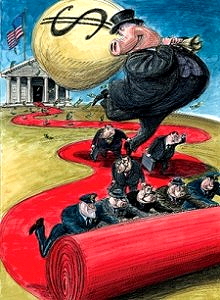 "When it comes to the economy, too many Americans continue to be numbed by the soothing sounds of conservative spin in the media. Here are three of their more inventive claims:

1. Higher taxes on the rich will hurt small businesses and discourage job creators. A recent Treasury analysis found that only 2.5% of small businesses would face higher taxes from the expiration of the Bush tax cuts. As for job creation, it’s not coming from the people with money. Over 90% of the assets owned by millionaires are held in a combination of low-risk investments (bonds and cash), the stock market, real estate, and personal business accounts. Angel investing (capital provided by affluent individuals for business start-ups) accounted for less than 1% of the investable assets of high net worth individuals in North America in 2011. The Mendelsohn Affluent Survey agreed that the very rich spend less than two percent of their money on new business startups. The Wall Street Journal noted, in way of confirmation, that the extra wealth created by the Bush tax cuts led to the “worst track record for jobs in recorded history.”

2. Individual initiative is all you need for success. President Obama was criticized for a speech which included these words: “If you’ve been successful, you didn’t get there on your own…when we succeed, we succeed because of our individual initiative, but also because we do things together.” ‘Together’ is the word that winner-take-all conservatives seem to forget. Even the richest and arguably most successful American, Bill Gates, owes most of his good fortune to the thousands of software and hardware designers who shaped the technological industry over a half-century or more. A careful analysis of his rise shows that he had luck, networking skills, and a timely sense of opportunism, even to the point of taking the work of competitors and adapting it as his own.

Gates was preceded by numerous illustrious Americans who are considered individual innovators when in fact they used their skills to build upon the work of others. On the day that Alexander Graham Bell filed for a patent for his telephone, electrical engineer Elisha Gray was filing an intent to patent a similar device. Both had built upon the work of Antonio Meucci, who didn’t have the fee to file for a patent. Thomas Edison’s incandescent light bulb was the culmination of almost 40 years of work by other fellow light bulb developers. Samuel Morse, Eli Whitney, the Wright brothers, and Edison had, as eloquently stated by Jared Diamond, “capable predecessors…and made their improvements at a time when society was capable of using their product.”

If anything, it’s harder than ever today to ascend through the ranks on one’s own. As summarized in the Pew research report ”Pursuing the American Dream,” only 4% of those starting out in the bottom quintile make it to the top quintile as adults, “confirming that the ‘rags-to-riches’ story is more often found in Hollywood than in reality.”

3. A booming stock market is good for all of us. The news reports would have us believe that happy days are here again when the stock market goes up. But as the market rises, most Americans are getting a smaller slice of the pie. In a recent Newsweek article, author Daniel Gross gushed that “The stock market has doubled since March 2009, while corporate profits and exports have surged to records.”

But the richest 10% of Americans own over 80% of the stock market. What Mr. Gross referred to as the “democratization of the stock market” is actually, as demonstrated by economist Edward Wolff, a distribution of financial wealth among just the richest 5% of Americans, those earning an average of $500,000 per year. Thanks in good part to a meager 15% capital gains tax, the richest 400 taxpayers DOUBLED their income and nearly HALVED their tax rates in just seven years (2001-2007). So dramatic is the effect that anyone making more than $34,500 a year in salary and wages is taxed at a higher rate than an individual with millions in capital gains.

There’s yet more to the madness. The stock market has grown much faster than the GDP over the past century, which means that this special tax rate is being given to people who already own most of the unearned income that keeps expanding faster than the productiveness of real workers.

And one fading illusion: People in the highest class are people of high class. Scientific American and Psychological Science have both reported that wealthier people are more focused on self, and have less empathy for people unlike themselves. This sense of self-interest, according to a study published in the "Proceedings of the National Academy of Sciences" and other sources, promotes wrongdoing and unethical behavior. Can’t help but think about bankers and hedge fund managers."
- http://www.counterpunch.org/
Posted by CoyotePrime at 7:02 PM