“Trickle Down Economics is a Pyramid Scheme” 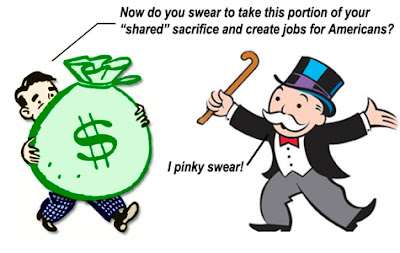 “Trickle Down Economics is a Pyramid Scheme”
by Tina Dupuy

“A few years ago, I had a friend who didn’t want anyone to know she was going to therapy. Instead, she would announce at her place of business she was leaving to attend her Amway meeting. At one point I had to inform her, “You know that doesn’t make you look any less crazy, right?”

The classic multi-level marketing or pyramid scheme is where one guy at the top convinces people at the bottom to give the top money. The hope is the guys in the middle will recruit enough people under them to move from the middle to the top—hence the pyramid shape. The model is, clearly, and provably unsustainable. Only a couple of people (those at the top) do well. Everyone else gets ripped off. In fairness, Amway, has massaged its methods enough to not qualify as the illegal type of pyramid scheme. It’s now the more legal type of pyramid scheme.

But the model—the idea of those at the bottom sacrificing their retirement benefits (pensions, social security, Medicare etc.) so that the top tier can pay even less in taxes is what Romney/Ryan are peddling. Mitt Romney wants to cut taxes for the wealthy. Paul Ryan’s budget would shrink benefits to give the savings in the form of a tax cut to the highest brackets. What didn’t work in the Bush years to strengthen the middle-class (evident by their Lost Decade), they tell us will work this time! Or as veep-pick also-ran, Senator (R-FL) Marco Rubio put it, “We have never been a nation of haves and have-nots. We are a nation of haves and soon-to-haves.” 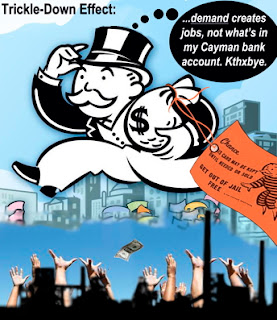 No, actually, we are a nation of haves and have-nots. We have the worst wealth inequality of all industrialized nations. Our poverty rate is the highest in more than 50 years at 15.7 percent. Contrast that with the top 1 percent of Americans who own nearly half—42 percent of the nations wealth. Also that same top 1 percent only has 5 percent of the nation’s debt. So 99 percent of Americans own 58 percent of the pie and have 95 percent of the debt. We’re fatter, sicker, further in debt and using the most illegal drugs in the world—all signs Americans have become overspent from bad economic policies. But the haves—these demigods of capitalism—won’t trickle their wealth down to us because of “uncertainty in the market” according to Republicans. Therefore we bribe them with an even lower tax rate!

Instead of calling it “trickle down” which has been largely panned for decades—the new term is “not punishing success.” “If your priority in this country is to punish success vote for President Obama,” said the offshore account holder, Mitt Romney.

We’re actually not a nation of haves at all. Not if you go by a simple majority—or even a super majority—we’re a nation of have-nots. Have-nots being sold on a fantasy of wealth trickling down if we’re nice enough to the haves. Trickle down economics is a pyramid scheme: It’s the rich telling us if we just recruit others to believe in the con then we will become the rich too. It’s a lie.”
- http://www.cagle.com/
Posted by CoyotePrime at 1:41 PM