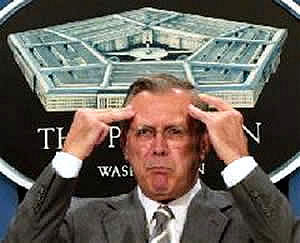 The textbooks are full of known knowns. We are quite confident affirming the circulation of the blood, the distance to the Sun, the common descent of animals and plants. I sit here in the college library within a few steps of shelf after shelf of known knowns, the accumulated body of reliable knowledge- the Qs, in our Library of Congress classification system- upon which is based modern "civilization"- the Rs, Ss, Ts, Us and Vs, medicine, agriculture, technology, and military and naval science.

To be sure, it is a characteristic of science that the known knowns are not etched in stone. Even the most confidently affirmed paradigms are written in pencil, ready to be erased or edited if necessity requires. That doesn't happen often. By and large, the known knowns accumulate at an ever-increasing rate. It is impossible for even the most accomplished scientist to keep up, except, perhaps, within a narrow specialty.

Then there are known unknowns. The nature of dark energy, for example. The mechanisms of memory and consciousness. The origin of life on Earth. Questions like these attract the curiosity of the most talented researchers. Faced with such questions, we say "I don't know yet, but I'd like to find out."

I have often used here the metaphor of knowledge as an island in a sea of mystery. The island is the known knowns. The shoreline is where we encounter the known unknowns. And then there is whatever is over the far horizon- the unknown unknowns.

Are there unknown unknowns that are unknowable? Who knows? My guess is yes. We are finite creatures living (even as a species) for a finite time in a universe that may be infinite and eternal. Which should be reason enough to live lives of quiet, tolerant, agnostic reverence.”
http://blog.sciencemusings.com/search?updated-min=2012-01-01T00:00:00Z&updated-max=2013-01-01T00:00:00Z&max-results=50
Posted by CoyotePrime at 6:40 PM