Chet Raymo, “In Place of Belief” 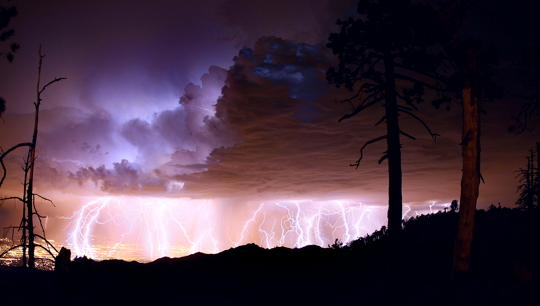 “In Place of Belief”
by Chet Raymo


“A lightning storm the other night, slipping down from Florida. For an hour we sat on the terrace and watched the northern sky blaze with pyrotechnics, the best we'd ever seen, almost continuous rivers of electricity streaming between the clouds, clouds heaped like mountains and lit from within. After some particularly sky-filling explosions we could not resist applause. From horizon to horizon, from Andros to San Salvador the streamers ran, trailing their rumbles of far-off thunder. So much energy! Energy entirely beyond the human capacity to control, beyond the human capacity to comprehend.

There is a delicacy in nature- the hummingbird at the feeder, the gecko's flicking tongue, the textured sand after a shower. There is a power too- awesome and ominous, booming and cascading across the night. I think of lines from a poem of Grace Schulman, a poem called “In Place of Belief”:

“...I would eavesdrop, spy,
and keep watch on the chance, however slight,
that the unseen might dazzle into sight.”