"I was thinking recently about August 7, 1945. I was almost nine years old, growing up in Chattanooga, Tennessee. The previous day an atomic bomb had exploded over the heart of Hiroshima. As I recall, all of us, adults and children, struggled to understand this extraordinary event, so remote from common knowledge and experience. It was clear that humanity had crossed a threshold, but to what? Within eight days, the war would be over. One mystery was solved: We now knew what was going on up Highway 11 in Oak Ridge, Tennessee, previously a source of wild speculation.

Anyway, as I dredged my memory for the child's awareness of the birth of the Atomic Age, one black-and-white image stood out: the obliterated city of Hiroshima. I brought up a Google Earth image of the city today. You can see a snapshot below. To the left, Hiroshima's Peace Memorial Park. Surrounding it, a modern, bustling city, essentially indistinguishable from any modern city anywhere. At the top center, across the street from the park, what appears to be a baseball stadium! 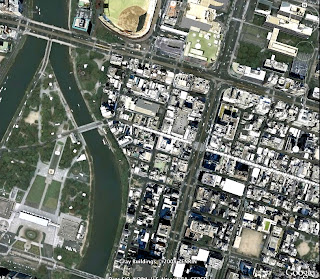 The T-bridge at top left was the target for the Enola Gay. (Click to enlarge.)

I don't mean to make light of the terrible tragedy that befell the people of Hiroshima, or the lingering human scars both physical and psychological. But the environment seems to have healed, at least by the evidence of Google Earth.

What about the country that initiated the Atomic Age? I used Google Earth to bring up an image of the Hanford Reservation in Washington state, where the plutonium was produced for the Trinity test in New Mexico and the Nagasaki bomb- and thousands of subsequent weapons. That's the reservation to the left of the river in the image below, a wasteland. Granted, this part of the state, in the rain shadow of the Cascades, is naturally desert. The area to the right of the river is irrigated orchard and farmland. The Hanford Reservation is still too poisoned by radioactive waste to allow human habitation or cultivation. 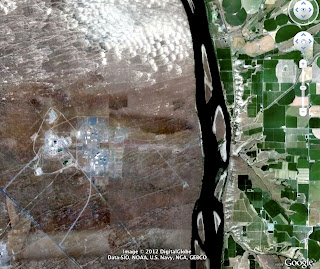 The nuclear testing range in southern Nevada and the Bikini and Eniwetok Atolls likewise remain bleak and scarred with radioactivity, and in the case of Bikini, uninhabitable.”
- http://blog.sciencemusings.com/
•
What's that? Fukushima? Oh yeah, Fukushima...
- CP
Posted by CoyotePrime at 6:56 PM