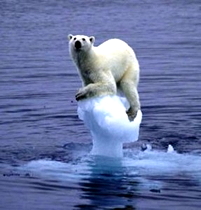 "Science-deniers soon may have no choice but to accept the phenomena of global climate change as a result of human action. Results from a scientific study conducted in 20 developing countries provide undeniable evidence that carbon dioxide emissions (greenhouse gasses) from the burning of fossil fuels could result in 100 million human deaths by the year 2030, and it may be too late to do anything about it.

The Guardian reports that: "The 331-page study, entitled "Climate Vulnerability Monitor: A Guide to the Cold Calculus of A Hot Planet" and published on Wednesday, was carried out by the DARA group, a non-governmental organization based in Europe, and the Climate Vulnerable Forum. It was written by more than 50 scientists, economists and policy experts, and commissioned by 20 governments."

Unless you've been living in a cave, you're aware of the unpredictable, dangerous weather patterns that have caused tsunamis, floods, extreme droughts, hurricanes and tornadoes all over the planet.  According tot his recent report, that's just the tip of the (melting) iceberg. 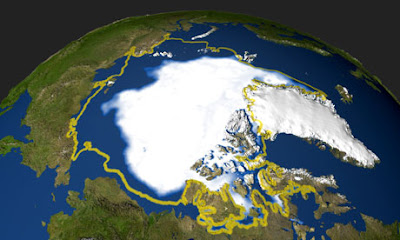 This satellite image shows the minimum concentration of Arctic sea ice in 2005,
when the sea ice extent dropped to 2.05m sq miles, the lowest recorded.
The yellow outline indicates where the concentration of ice was as of September 1979.

The Guardian continues: "Scientists have been alarmed by the increasingly rapid melting of Arctic sea ice, which reached a new record minimum this year and, if melting continues at similar rates, could be ice free in summer by the end of the decade. Some research suggests that this melting could be linked to cold, dull and rainy summers in parts of Europe- such as has been the predominant summer weather in the UK for the last six years. In the US, this year's severe drought has raised food prices and in India the disruption to the monsoon has caused widespread damage to farmers.
․
Connie Hedegaard, the European Union's climate chief, warned that extreme weather was becoming more common, as the effects of climate change take hold. 'Climate change and weather extremes are not about a distant future,' she wrote in a comment for the Guardian last week. 'Formerly one-off extreme weather episodes seem to be becoming the new normal.'"

Teabaggers love to ridicule Al Gore and his "Inconvenient Truth," but they very well may be chuckling through their gas masks in the very near future.”
- http://www.opednews.com/
www.mikemalloy.com
Posted by CoyotePrime at 9:46 PM