"Some creep in Texas lynched an empty chair from a tree in his yard, an act presumably meant to mirror Clint Eastwood's RNC conversation with Obama. We're not sure what to say about this, or whether there is any earthly reason to show it, except that it and a lot of other ugliness like it is out there, and ignoring it doesn't make it go away, and maybe calling it out might help to. Or not. The homeowner, Republican Bud Johnson, won "Yard of the Month" in August 2010. 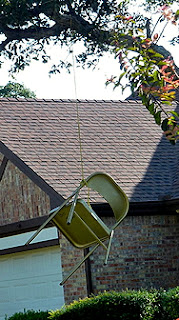 "I don't really give a damn whether it disturbs you or not. You can go straight to hell and take Obama with you. I don't give a shit. If you don't like it, don't come down my street."
- Bud Johnson.”
- http://www.commondreams.org/
•
Well Bud, you good old boy, I'd just love to respond to this, but if I said what I'd really like to say Google would shut this blog down in a half a second, and an ignorant little bigot like you is simply not worth it... Just so's ya know, I don't give a damn what YOU and others like you don't like, either, stay off my blog. Oh, silly me not to remember, the dry cleaner called, said your hooded sheets were ready, hurry on over and get 'er done!
- CP
•
"When he said we were trying to make a fool of him,
I could only murmur that the Creator had beat us to it."
- Ilka Chase
•

Hat tip to Teresa Evangeline for this material.

Posted by CoyotePrime at 4:25 PM