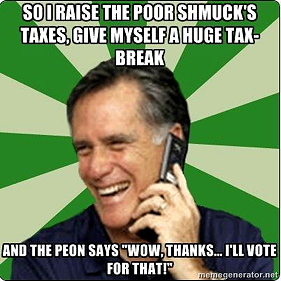 NEW YORK (The Borowitz Report)— "With just forty-one days to go until the election, Mitt Romney is in a race against time to offend the few voters he has not already alienated, his campaign manager said today. “So far, Mitt’s efforts to make voters dislike him have gone exactly as planned,” said the campaign manager Matt Rhoades. “But let’s not kid ourselves—we’ve still got a few supporters out there and we’ve got to find ways to piss them off.”

As Mr. Romney embarked on a bus tour with the goal of spreading additional unease about his candidacy, his campaign manager reflected on a program of systematic alienation that has so far “worked like clockwork.” “We really got the ball rolling at the Olympics,” Mr. Rhoades said. “I seriously doubted that Mitt could turn a visit to London into a show of international ineptitude, but he was like, ‘Matt, trust me—I can do this.’” Mr. Rhoades also credited the addition of Rep. Paul Ryan to the ticket for being “invaluable” in scaring off potential voters: “Mitt knew he could get booed off the stage at the N.A.A.C.P., but it takes someone special to get booed off the stage at the A.A.R.P.”

The campaign manager acknowledged that there were “a few hiccups” in the plan to turn off voters, but that the Romney team worked quickly to fix them: “At the Convention in Tampa, Clint Eastwood was planning to go out and read a prepared speech endorsing Mitt. I pulled him aside and said, ‘Clint, that will ruin everything we’re trying to do here. Shout at a chair instead.’ And then we were golden.”

The “secret video” showing Mr. Romney at a fundraiser was another coup for the campaign, Mr. Rhoades said, adding, “We actually shot that video ourselves and then ‘leaked’ it to Mother Jones. It was the simplest way we could think of to take forty-seven per cent of the votes off the table.” Mr. Rhoades admitted that he is gratified by how well the campaign’s plan to offend different constituencies has worked so far, but with only six weeks to go until the election, they are leaving nothing to chance: “This week, we’re releasing a video of Mitt swinging a cat by its tail.”
- http://www.newyorker.com/
Posted by CoyotePrime at 1:52 AM