Satire: "A Letter from Ann Romney" 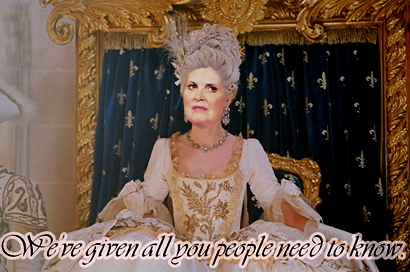 "A Letter from Ann Romney"
by Andy Borowitz

I’m not a happy camper. Over the past few days, some so-called Republicans have taken it upon themselves to lob some pretty harsh words in the direction of my husband. Now, it’s one thing when Mitt gets criticized by the forty-seven per cent of Americans who are parasites sucking at capitalism’s teat. But when former Reagan speechwriter Peggy Noonan calls his campaign “a rolling calamity,” it’s time for Ann Romney to kick some ass.

Which brings me to you. This is not a fundraising appeal. Lord knows this campaign has all the money it needs, especially since Mitt went to Vegas and promised Sheldon Adelson he’d bomb Tehran on Day One. As Mitt’s wife, I’m asking you to pledge something far more valuable:

By signing the pledge form below, you become an official member of Ann Romney’s Circle of Silence, an élite tier of the Romney for President Campaign. As a member of the C.O.S., you will receive priority ticketing to the Inauguration, as well as a collectible “Loose Lips Sink Mitt” ball gag. All you have to do is shut the freak up until Election Day. That’s right, for the next forty-six days, I’m asking you to bite your tongue every time Mitt says or does something idiotic. If you think that sounds difficult, welcome to my world.

And Peggy Noonan, if you’re reading this: you want a piece of Ann Romney? Then get in the ring, girlfriend, and I’ll mess you up good."