"The Economics Of War: The Real Story" 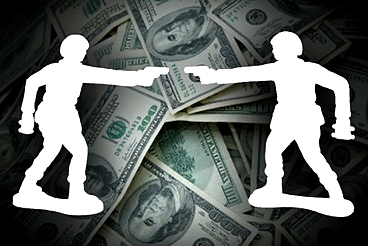 "The Economics Of War: The Real Story"
By Shobhit Agarwal

“Every gun that is made, every warship launched, every rocket fired signifies, in the final sense, a theft from those who hunger and are not fed, those who are cold and not clothed. This world in arms is not spending money alone. It is spending the sweat of its laborers, the genius of its scientists, the hopes of its children. This is not a way of life at all in any true sense. Under the cloud of threatening war, it is humanity hanging from a cross of iron.”

Fact list-1:
• Almost half the world, over 3 billion people, live on less than $2.50 a day.
• 1 billion children live in poverty (1 in 2 children in the world). 640 million live without adequate shelter, 400 million have no access to safe water, and 270 million have no access to health services.
• 2.2 million children die each year because they are not immunized.
• Funds close to the tune of $150 billion are required to meet the complete targets set by countries in Millennium Development Goal (MDG) to wipe out poverty.

On combining the two lists together, what we get is a list of startling facts:

• Less than 1% of what the world spent every year on weapons was needed to put every child into school.
• Poverty will be eradicated many times over from the face of this planet if a fraction of the funds spent on military was spent on that front.
• Every person in the world will be immunized against all form of preventive diseases if only a small portion of the world’s military budget was employed for the same.

The facts are for everyone to see. It is not that we aren’t familiar with these facts. Rather, we choose to pretend to not be in the know-how of reality. Advocators will argue that war is a necessary evil required to maintain peace. But most such preachers of war have vested interests. With billions of dollars riding on arms sales and deals, rather than the need of the times, it is usually the need of economics that dictate the onset of war.

There is no novelty in talking about the cultural and social impact of war. Enough has been said and written about it and that too by people with significant credentials. However, what needs to talked about is the economics behind the war. Just to cite an example, the war on Iraq was carried out by the USA on the pretext of “removing a regime that developed and used weapons of mass destruction; that harbored and supported terrorists; committed outrageous human rights abuses and defied the just demands of the United Nations and the world.” Even at the initial phase of the war itself, theories about the chief reason of war being America’s intent on stamping an authority on Iraq’s oil fields had been doing the rounds.

On August 30, 2005, Bush stated that one of the roles of the occupation of Iraq was ‘also’ to prevent oil fields from falling into hands of terrorists: “If Zarqawi and Bin Laden gain control of Iraq, they would create a new training ground for future terrorist attacks. They’d seize oil fields to fund their ambitions.” Alan Greenspan, the former Federal Reserve chairman, said in an interview that the removal of Saddam Hussein had been essential to secure world oil supplies. He quoted, “I am saddened that it is politically inconvenient to acknowledge what everyone knows: the Iraq war is largely about oil.”

We see how what appeared to be a clear cut war against a tyrant dictator, has more to it than what meets the eye. And this unfortunately is true for almost all the wars that have been fought in the past century. What is further surprising is to know that at a time when a deep economic recession is causing much turbulence in the civilian world, defence giants such as Boeing and EADS, or Finmeccanica and Northrop Grumman, are enjoying a reliable and growing revenue stream from countries eager to increase their military might.

Wars have been fought in the past and will continue to be fought in the future. The vested interests of a few are going to outnumber the needs of the many. At least, the powers who initiate wars owe the bearers the real reasons behind their attacks."
- http://www.youthkiawaaz.com/
Posted by CoyotePrime at 2:48 PM