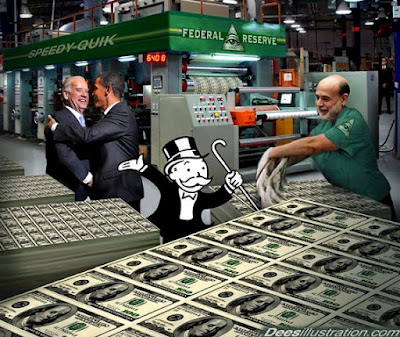 “Hey! What gives?!” Investors want to know, “What happened to all of Mr. Bernanke’s money?” You’ll recall that, a couple of weeks ago, the central banking industry’s most famous beard announced that he would flood the markets with another round of quantitative easing, or “QE.” The Fed, under Famous Beard’s deft stewardship, would begin purchasing $40 billion “worth” of mortgage-backed securities per month until…well…until forever.

The program is supposed to boost the stock market, increase house prices and bolster GDP. One report we saw, released by very smart and capable men over at Deutsche Bank, claimed that, for every $800 billion Famous Beard prints, there will be a corresponding 0.32% fall in the unemployment rate. No kidding! They actually wrote that. Not 0.31%…and certainly not 0.33%…but exactly 0.32%. See how smart these guys are? Even hundredths of a percent don’t scare them.

But it doesn’t stop there, ladies and gentlemen. According to the DB analysis, each and every $800 billion in newly inked bills will also,

All that with only a 0.25% increase in inflation “expectations.” And really, who cares about expectations?

What’s not to like, Fellow Reckoner? This ought to be a joyous occasion. An event to mark the ages. Men and women should be gathering in the streets to celebrate. Soldiers, you can finally lay down your arms. There will be no need for war now. Famous Beard & Co. have solved the world’s most vexing problem…how to create something from nothing.

All that needs to be done now is some simple calculations. Hmm. Let’s see… If unemployment is currently about 8%…and every $800 billion in wet Benjamins reduces that rate by roughly a third of a percent (“No…wait! It’s 0.32%,” cry the DB men)…then Famous Beard needs only to print another $19.2 trillion (8 x 3 x 800 billion) and unemployment will be gone forever!

Of course, using DB’s numbers above as a rough guide, $19.2 trillion will also…

All while increasing inflation expectations by a measly 6%. And again we ask, who cares about expectations? But still investors persist with their pesky questions: What gives? What happened to all of Mr. Bernanke’s money? After an initial burst of enthusiasm, stocks have mostly languished since the announcement of QE3. This past week alone they’re down about 140 points. That’s not a huge loss, mind you…but neither is it even a tiny gain. It’s still early days, to be sure. Perhaps Famous Beard’s magic just needs some more time to work. (And let’s not forget…he’s given himself until forever to get it right.)

One day, people may come to realize that their rulers are not omnipotent beings, capable of working wondrous miracles for all of mankind. Governments are not gods. Neither are their central bankers. Barely are they even men. When their crackpot schemes come unstuck and their fraud and folly exposed for what it truly is, we’ll be left only to wonder… Really, what did we expect from them?”
- http://dailyreckoning.com/
•
Related:
“QE Shell Game: Money Printing “Till The Cows Come Home”
- http://sabbah.biz/mt/
Posted by CoyotePrime at 4:20 PM