The Economy: "Marc Faber Warns: 'Everything Will Collapse'” 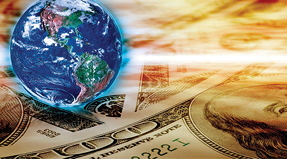 "Marc Faber Warns: 'Everything Will Collapse'”
By Money Morning Staff Reports
․
“Ruin from Man is most conceal’d when near,
And sends the dreadful Tidings in the Blow.”
– Edward Young, “Night Thoughts”

"Famed economist Marc Faber appeared on Bloomberg TV with a harsh, direct warning to investors. "U.S. monetary policies will destroy the world," he said, referring to the new round of stimulus - QE3, or "QE Forever" - the Fed plans to launch this year. As the publisher of the influential "Gloom Boom & Doom" report, Faber is well-known for making ominous predictions. Many regard him as the first to warn investors to get out of the stock market one week before the October 1987 crash. And since the 2008 meltdown, he's been a fierce critic of the Fed's policy of money printing, arguing it only creates a phony recovery. So it wasn't surprising to hear him speak out against Bernanke's most recent stimulus plan, quantitative easing or QE3.

What was surprising - and frightening - was the level of wealth-destruction he believes will occur. According to Faber, "eventually we will have a systematic crisis and everything will collapse." Faber couldn't pin down the timing of his alarming prediction, but said the bigger concern wasn't when the economic storm will begin, but how high the market will go until then. "The question is really between here and then," he said. "Will everything collapse with Dow Jones 20,000 or 50,000 or 10 million? Mr. Bernanke is a money printer and, believe me, if Mr. Romney wins the election the next Fed chairman will also be a money printer. And so it will go on."

Faber's not alone. A group of his economic peers agree that with more central bank action like QE3, global economic collapse is imminent.  In a newly released documentary that went viral last month, a team of influential economic experts say they have discovered a "frightening pattern" they believe points to a massive economic catastrophe unlike anything ever seen. And according to these experts - who have presented their findings to the United Nations, the UK Parliament and a long list of world governments - the catastrophe may happen well before Americans hit the polls in November. The work of this team garnered such attention, they were brought in front of the United Nations, U.K. Parliament, and numerous Fortune 500 companies to share much of their findings.

"What this pattern represents is a dangerous countdown clock that's quickly approaching zero," said Keith Fitz-Gerald, the Chief Investment Strategist for the Money Map Press, who predicted the 2008 oil shock, the credit default swap crisis that helped bring about the recession, and the Greek and European fiscal catastrophe that is still wreaking havoc until this day. The resulting chaos is going to crush Americans."

Another member of this team, Chris Martenson, a global economic trend forecaster, former VP of a Fortune 300, and an internationally recognized expert on the dangers of exponential growth in the economy, explained their findings further: "We found an identical pattern in our debt, total credit market, and money supply that guarantees they're going to fail," Martenson said. "This pattern is nearly the same as in any pyramid scheme, one that escalates exponentially fast before it collapses. Governments around the globe are chiefly responsible. And what's really disturbing about these findings is that the pattern isn't limited to our economy. We found the same catastrophic pattern in our energy, food, and water systems as well." According to Martenson, these systems could all implode at the same time. "Food, water, energy, money. Everything."

Dr. Kent Moors, one of the world's leading energy analysts, who advices 16 world governments on energy matters and who currently serves on two State Department task forces on energy, also voiced concerns over what he and his colleagues uncovered. "Most frightening of all is how this exact same pattern keeps appearing in virtually every system critical to our society and way of life," Dr. Moors stated. "It's a pattern that's hard to see unless you understand the way a catastrophe like this gains traction," Dr. Moors says. "At first, it's almost impossible to perceive. Everything looks fine, just like in every pyramid scheme. Yet the insidious growth of the virus keeps doubling in size, over and over again - in shorter and shorter periods of time - until it hits unsustainable levels. And it collapses the system."

Martenson points to the U.S. total credit market debt as an example of this unnerving pattern. "For 30 years - from the 1940s through the 1970s - our total credit market debt was moderate and entirely reasonable," he says. "But then in seven years, from 1970 to 1977, it quickly doubled. And then it doubled again in seven more years. Then five years to double a third time. And then it doubled two more times after that. "Where we were sitting at a total credit market debt that was 158% larger than our GDP in the early 1940s... By 2011 that figure was 357%." Dr. Moors warns this type of unsustainable road to collapse can be seen today in our energy, food and water production. All are tightly connected and contributing to the economic disaster that lies directly ahead.

According to polls, the average American is sensing danger. A recent survey found that 61% of Americans believe a catastrophe is looming - yet only 15% feel prepared for such a deeply troubling event. Fitz-Gerald says people should take immediate steps to protect themselves from what is happening. "If our research is right," says Fitz-Gerald, "Americans will have to make some tough choices on how they'll go about surviving when basic necessities become nearly unaffordable and the economy becomes dangerously unstable."
- http://moneymorning.com/
Posted by CoyotePrime at 1:47 PM