"The Problem With Proverbs" 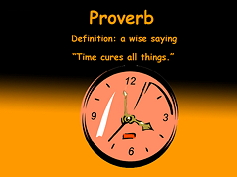 "The Problem With Proverbs"
by Patrick Cockburn

"My father, Claud Cockburn, invented a game in which participants made up national sayings that had to be completely meaningless but sound appropriate to their purported country of origin. An example could be the traditional Norwegian saying, “the tree is taller than the highest wave” or, as they say in India, “all is not nothingness, nor the nothingness all”.

The idea for the game came to him on the top of a bus in London which was crawling along in a traffic jam. He overheard a passenger in the seat in front of him complain to a friend about their slow pace, whereupon the friend gave a resigned shrug of the shoulders and replied, “speed is what you make it”. The meaninglessness of the words impressed my father along with a sense that the mustn’t-grumble-but-endure tone of the speaker was peculiarly British.

The sayings should appear at least vaguely meaningful at first sight. For instance, there is the French proverb “il y a des gants sans les mains dedans – some gloves have no hands in them”. Plausible proverbs devoid of meaning are not necessarily easy to manufacture. At first, the traditional Scandinavian saying, “the pine is tall, but does not reach the sky” looks like a winner, but it contains the trite idea that the large or successful have their limitations. A similar objection might rule out the nostrum of Norfolk country folk, in fact invented by my wife, which holds that “burrowing badgers catch no butterflies”.

National sayings may be dull from overuse or were shallow stuff in the first place. As a foreign correspondent, I used occasionally to buy books of local proverbs, hoping that I could use one in an article to illustrate some news event in the country where I was reporting. Inclusion of an obscure but exotic local nostrum in my copy was much better than a quote from a diplomat and would hopefully give the reader the impression that I had my finger on the pulse of indigenous culture and tradition. I did this in Haiti in the early 1990s and again in Afghanistan 10 years later. My idea never really worked out because people in lots of countries seem to have made the same true but banal observations about life. Friends in Beirut used to tell me political jokes with tears of laughter running down their faces, but then had to give me a tutorial on who-was-who in Lebanese politics before I could even pretend to laugh at the right moments.

Sayings by individuals are generally more interesting than national proverbs, but the appetite for these soon cloys. Those most frequently quoted in dictionaries of quotations come across as self-important, patronizing and with a firm grip on the obvious. Often they sound plain wrong or are speaking for effect, as with Gertrude Stein declaring that “in the United States there is more space where nobody is than where anybody is. That is what makes America what it is”. This has a contrived midnight-oil feel to it as does Stein’s overused remark, speaking of Oakland, California, that “there is no there there”. The quote used to be especially favored by foreign writers and journalists making snide remarks about the supposed lack of character of American heartlands.

Jokes can be more telling about national character and beliefs than proverbs, though really good ones that don’t sound dated are rare. For instance, there is an Israeli joke used to describe a succession of senior Israeli military officers in recent decades which simply says, “he was so stupid that even the other generals noticed”. This tells one more about what many well-informed Israelis privately think of their military commanders than a dozen carefully written analyses of the Israeli army.

The British sometimes claim that their humor is too subtle and ironic to appeal to those from different cultures. An example often cited is the famous Punch cartoon of the 1930s showing two hippos in a tropical pool, one saying to the other, “I keep thinking it’s Tuesday”. When I was about eight years old I was given a 20-volume collection of old Punch cartoons that dated from the beginning of the First World War until the end of the 1930s and which I found very unfunny. I can remember only one cartoon that seems genuinely amusing in retrospect. It shows a parliamentary candidate on a platform addressing a political meeting with the Union flag behind him. In contrast to contemporary cartoons, there are several lines of dialogue underneath. So far as I recall, they read: “Voice from audience: ‘Can the candidate explain why the Union Jack behind him is upside-down?’ Candidate (glancing round): ‘I can only suppose that the person who put it there was so lacking in common patriotism that he did not know the correct position of our national emblem.’ Voice from audience: ‘Well, it isn’t upside-down.’ ”

Proverbs and memorable remarks inevitably degrade into clichés through overuse. Famous quotes, such as the denunciation of Roman imperialism put into the mouth of a British resistance leader by Tacitus – “they make a desert and they call it peace” – has echoed down the centuries but loses impact through overfamiliarity.

Collections of quotations tend to draw on a limited pool of predictable contributors. By way of contrast, what is striking about the recently published "Quips & Quotes: A Journalist’s Commonplace Book" by my friend Richard Ingrams is its freshness, skepticism and depth. Put together haphazardly by the author over the last half-century, it is a mix of quotes from people long forgotten and others still famous. Their sayings bubble with originality. Lenin quotes are fairly common but I never knew he had said that “the best government has only to be in power long enough for everybody to wish to remove it”. The statement is simple enough but worth bearing in mind as an explanation for every revolution in history down to the Arab Spring uprisings last year. There is the same sort of compelling simplicity in the words of William Cobbett, the great radical journalist, who wrote that “it is the chief business of a government to take care that one part of the people does not cause the other part to lead miserable lives”.

Not many people remember Sefton Delmer, the chief foreign correspondent of the "Daily Express" in the 1950s, but he once said: “I can only think clearly in a five-star hotel.” He is quoted as saying on another occasion that “in real life, the women pursue the men. It is only in Somerset Maugham that the men pursue the women”. I particularly like the remark of Peter Cook: “Cricket is nothing if it is not one man pitted against a fish.”

Few real proverbs are as interesting as these. But my father discovered two, both Chinese, that are equal in appeal and which I have never seen quoted elsewhere. One says: “Do not tie your shoelace in a melon field or adjust your hat under a plum tree if you want to avoid suspicion.” The other competes with Peter Cook’s in its cryptic allure: “Of nine bald men, eight are deceitful and the ninth is dumb.”
- http://www.counterpunch.org/
Posted by CoyotePrime at 5:12 PM