"The 'Self-Made' Hallucination of America's Rich" 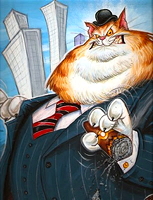 "The 'Self-Made' Hallucination of America's Rich"
by Sam Pizzigati

"Let's cut Mitt Romney some slack. Not every off-the-cuff comment he made at that now infamous, secretly taped $50,000-a-plate fundraiser in Boca Raton reveals an utterly shocking personal failing. Take, for instance, Mitt's remark that he has "inherited nothing." A variety of commentators have jumped on Romney for that. They've pointed out that Mitt, the son of a wealthy CEO, has enjoyed plenty of privilege — everything from an elite private school education to a rolodex full of rich family friends he could tap to start up his business career. On top of that, the struggling young Mitt had $1 million worth of stock his father threw his way to tide him over until the big paydays started arriving.

Not quite "nothing." But there's no reason to pick on Mitt either. Most deep pockets, not just Mitt, consider themselves "self-made." The best evidence of this predilection to claim "self-made" status? The annual September release of the Forbes magazine list of the 400 richest Americans.

Each year Forbes celebrates the billionaires who populate its 400 list as paragons of get-up-and-go. The latest list, according to Forbes itself, "instills confidence that the American dream is still very much alive." Of America's current 400 richest, says the magazine, 70 percent "made their fortunes entirely from scratch."

Forbes made the same observation last year, too, and most news outlets took that claim at face value. But United for a Fair Economy did not. The Boston-based group's analysts took the time to investigate the actual backgrounds of last year's Forbes 400. They released their findings on the same day Forbes released the new 2012 list. The basic conclusion from these findings: Forbes is spinning "a misleading tale of what it takes to become wealthy in America." Most of the Forbes 400, like Mitt, have benefitted from a level of privilege unknown to the vast majority of Americans. As commentator Jim Hightower has colorfully put it, most of our super rich were born on third base and think they hit a triple.

United for a Fair Economy extends this baseball analogy in its new Forbes 400 analysis. UFE defines as "born in the batter's box" those Forbes 400 rich who hail from poor to middle-class circumstances. Some had nothing growing up. Others had parents who ran small businesses. About 95 percent of Americans, overall, currently live in these "batter's box" situations. Just over a third, 35 percent, of the Forbes 400 come from these backgrounds. Just over 3 percent of the Forbes 400, United for a Fair Economy found, have left no good paper trail on their economic backgrounds. Of the over 60 percent remaining, all grew up in substantial privilege.

Those "born on first base" — in upper-class families, with inheritances up to $1 million — make up 22 percent of the 400. On "second base," from households wealthy enough to generate inheritances over $1 million, UFE found another 11.5 percent. On "third base," with inherited wealth of more than $50 million, sits 7 percent of America's 400 richest. Last but not least, is the "born on home plate" crowd. These high-rollers, 21.25 percent of the total Forbes list, all inherited enough to "earn" their Forbes 400 status.

Forbes, the United for a Fair Economy researchers sum up, has glamorized the myth of the "self-made man" and minimized "the many other factors that enable wealth," including tax breaks and other government policies that help the really rich get ever richer.

The narrative of wealth and achievement that Forbes is pushing, the new UFE study adds, "ignores the other side of the coin — namely, that the opportunity to build wealth is not equally or broadly shared in contemporary society." And many of those who do have that opportunity — like the mega millionaires in Boca Raton who applauded Mitt Romney's bogus assertion that he "inherited nothing" — see absolutely no reason to turn that coin over.”
- http://www.commondreams.org/view/2012/09/24-6
• 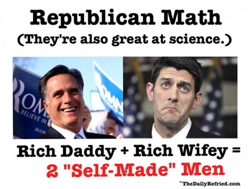 Posted by CoyotePrime at 5:22 PM