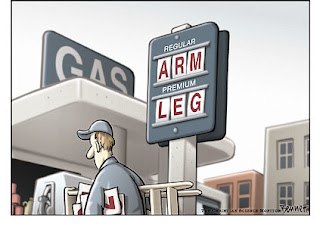 
"The latest mandate handed down from the Environmental Protection Agency (EPA) is so ridiculous, even I was shocked. The EPA has now mandated how much gasoline you must buy at certain gas stations. Say hello to the Obama Administration’s four gallon minimum. This unprecedented EPA overreach applies when filling up at a gas station that provides both E15 and E10, gasoline with 15 or 10 percent of ethanol, respectively, from the same hose.

At the insistence of the ethanol industry, the Obama Administration is pushing E15 into the marketplace, regardless of the serious concerns about the fuel’s impact on drivers. From its inception, E15 is a study in the consequences of government interference in the marketplace. The EPA’s decision to set a minimum purchase requirement is just the most recent example.

If this seems too far-fetched to be true, here is what the EPA recently wrote in a letter to the American Motorcyclist Association: “EPA requires that retail stations that own or operate blender pumps either dispense E15 from a dedicated hose and nozzle if able or, in the case of E15 and E10 being dispensed from the same hose, require that at least four gallons of fuel be purchased to prevent vehicles and engines with smaller fuel tanks from being exposed to gasoline-ethanol blended fuels containing greater than 10 volume percent ethanol.”
- http://beforeitsnews.com/
http://thehill.com/
•
“Every normal man must be tempted, at times, to spit on his hands,
hoist the black flag, and begin slitting throats.”
- H. L. Mencken
Posted by CoyotePrime at 4:49 PM