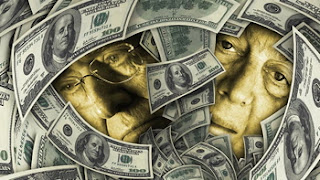 "The wealthy give plenty of excuses for our outrageously unjust society. They just go to show that extreme wealth can destroy your brain. As we try to grasp the reasoning behind cuts to life-saving programs while billion-dollar incomes and trillion-dollar profits are being made, we must understand that extreme wealth deadens parts of the brain. Empathy and honesty go first. Then rationality, as evidenced by some of the outlandish excuses given by the very rich for their abuses.

1. Excuses for Inequality: Here's what Goldman Sachs adviser Brian Griffiths said about it: "We have to tolerate the inequality as a way to achieve greater prosperity and opportunity for all." U.S. wealth distribution has become so extreme that nearly half of America has, on the average, ZERO WEALTH (debt exceeds assets). As for income, the richest 1% seemed to perform the impossible from 2009 to 2011, capturing MORE THAN 100% of the new income gains (income decreased for the other 99%). As irrational as it might seem to find an excuse for all this, the Heritage Foundation is up to the task, claiming that poor Americans are actually doing quite well with their TVs and air conditioners. Never mind that debt for the poorest quintile of Americans averages $27,000 more than their possessions.

2. Excuses for Bank Fraud: It seems unlikely that anyone would try to justify the lack of punishment for manipulating global interest rates and consorting with drug cartels. But excuses were readily available. Hyperbole made up for incomprehensibility. Treasury Secretary Hank Paulson warned us that without a bailout the world economy would collapse "within 24 hours." Assistant attorney general Lanny Breuer added that with criminal charges "the entire banking system would have been destabilized." Others questioned whether crimes had really been committed, or whether the people in charge even knew what was happening. In any event, bank backers noted, the financial institutions were fined. Four weeks of profits. And a bank CEO said he was "profoundly sorry."

3. Excuses for a Dormant Minimum Wage: Despite the logic and fairness of sharing record profits with low-wage workers who helped to make it all possible, a minimum wage increase has long been rejected because of the claim that it will increase unemployment. This has been refuted again and again and again. Yet well-positioned people persevere, armed with the same excuse. Says Paul Ryan: "I think it's inflationary. I think it actually is counterproductive in many ways. You end up costing jobs from people who are the bottom rung of the economic ladder." The Economic Policy Institute calculated that a minimum wage increase would actually CREATE up to 100,000 jobs by the middle of 2014.

4. Excuses for Not Paying Taxes: Rather than excuses, corporate heads often take the more aggressive denial route with their comments:
- A GE spokesperson: "We are committed to acting with integrity in relation to our tax obligations." GE paid 0% from 2008 to 2010.
- An Exxon spokesperson: "..any claim we don't pay taxes is absurd...ExxonMobil is a leading U.S. taxpayer." Exxon paid 2% from 2008 to 2010.

But CEOs still manage to come up with creative excuses. Caterpillar's Doug Oberhelman blamed Illinois. He said the state has "created an environment that is unfriendly to business and investment." Caterpillar paid less than 1% in state income taxes from 2008 to 2010.

As for individual taxes, the wealthy hang onto the foggy (and discredited) notion that a higher tax rate on the rich somehow "hurts the economy." Numerous inventive excuses come with the estate tax, most of them recycled from other tax arguments. The estate tax is accused of slowing economic growth, destroying jobs, suppressing wages, discouraging saving, and promoting wasteful spending. Actual facts, meanwhile, come from the Center on Budget and Policy Priorities, which notes that only the richest 2 in 1,000 estates pay any estate tax, at levels generally less than one-sixth of their values.

Excuses were even available for the special case of Facebook's part-owner Eduardo Saverin, who serendipitously landed Mark Zuckerberg as a roommate at Harvard, used American resources to make billions, and then revoked his citizenship to avoid paying any tax at all. A Forbes writer called Saverin an "American hero" for quitting on America. The American Thinker said "The U.S. tax code is so oppressive that smart and successful people like Saverin are compelled to renounce citizenship.." Saverin's defenders might not be aware of an OECD report that ranked U.S. taxes among the lowest in the world.

5. Excuses for No Taxes At All: One might feel ashamed paying no sales tax on credit default swaps when low-income mothers pay 10% on winter clothes for the kids. But not the guys on Wall Street. At any mention of a financial transaction tax (FTT) they get testy: It will ruin our liquidity! It will hurt the economy! It's a sin tax! But an FTT is inexpensive to administer, proven successful in other countries, and capable of generating hundreds of billions of dollars per year.

Perhaps it's only fair, in conclusion, to excuse the super-rich for their lack of empathy and honesty and rationality. They believe that their upward redistribution of wealth is showing everyone else the value of a little initiative and hard work. With such a spirit of free enterprise we can all aspire to the lofty goals of Charles Koch: "I want my fair share - and that's ALL of it."
- http://www.alternet.org/
•
Paul Buchheit is the founder and developer of social justice and educational websites (UsAgainstGreed.org, PayUpNow.org, RappingHistory.org), and the editor and main author of "American Wars: Illusions and Realities" (Clarity Press). He can be reached at paul@UsAgainstGreed.org.
Posted by CoyotePrime at 5:42 PM