“Are Humans Getting Dumber?” 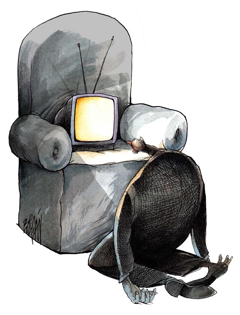 “Are Humans Getting Dumber?”
by Tom Purcell

“The report said people are getting dumber— at least I think that’s what it said, but the big words kept throwing me off.”

“Writing about the study in the Natural Society Newsletter, Mike Barrett says that, according to Crabtree, our cognitive abilities are the result of ‘the combined effort of thousands of genes.’ If a mutation were to happen to anyone, it could damage intelligence— and Crabtree thinks such mutations have occurred.”

“Which reminds me: Honey Boo Boo is on tonight.”

“Says Crabtree: ‘I would wager that if an average citizen from Athens of 1000 BC were to appear suddenly among us, he or she would be among the brightest and most intellectually alive of our colleagues and companions, with a good memory, a broad range of ideas, and a clear-sighted view of important issues.’”

“Crabtree says part of the reason people are dumber now is that Darwin’s theory of the survival of the fittest— the strong survive and the weak are weeded out— is no longer as relevant.”

“Well, Darwin didn’t survive, either, so what does he know?”

“Look, Crabtree is just arguing that the stronger and smarter are no longer necessarily able to dominate society, whereas the weaker and dumber are better able to survive and thrive than ever before.”

“Well, somebody has to run Congress.”

“Barrett, the fellow who wrote about Crabtree’s study, suggests there are additional reasons for people getting dumber. For starters, he says our water and food systems are contributing to lower intelligence. We pump fluoride into our water to prevent tooth decay, but some studies find it has an adverse effect on neurodevelopment in children.”

“Barrett cites other studies that show pesticides, which end up in our food supply, are ‘creating lasting changes in overall brain structure… that have been linked to lower intelligence levels and decreased cognitive function.’”

“Maybe so, but who wants to eat an apple with a bunch of wormholes?”

“I don’t know about IQ decline, but processed foods and high-fructose corn syrup make me cuckoo — cuckoo for Cocoa Puffs!”

“There is plenty of debate on whether or not pesticides and processed foods are doing as much damage as some researchers claim, but I think we can agree there are other things that are making humans dumber.”

“You’re not going to take away my video games again, are you?”

“Television is the biggest culprit. Every week, American adults spend 34 hours sitting in front of the tube, which trains their minds to be inactive and lazy— whereas reading a book or solving a puzzle helps develop critical thinking.”

“Who needs to think anymore? I rely on the major media to tell me what to think.”

“Regrettably, there is a frightening amount of truth in what you say. There is less critical thinking today. The less critical thinking there is, the easier it is for people to be easily persuaded by television and social media— and the less likely they are to make sound, intelligent decisions about the houses they buy or the politicians they vote for.”

“But back in 2008, everyone was buying houses they couldn’t afford and making a bundle! It wasn’t my fault I bought a mansion just before the bubble burst — or voted for ‘hope and change’ that has never come.”