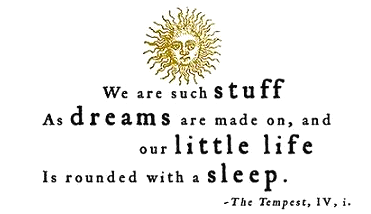 “Be not afeard; the isle is full of noises,
Sounds and sweet airs, that give delight, and hurt not.
Sometimes a thousand twangling instruments
Will hum about mine ears, and sometimes voices,
That, if I then had wak'd after long sleep,
Will make me sleep again.”

"Caliban is talking to Stephano and Trinculo in Shakespeare's “Tempest”, telling them not to be "afeard" of the mysterious place they find themselves, an island seemingly beset with magic, strangeness, ineffable presences. And you and I, and, yes, all of us, find ourselves inexplicably thrown up on this island that is the world, and we too, if we are attentive, hear the strange music, the sounds and sweet airs, that seems to come from nowhere and everywhere

I'm talking about the sounds we hear in utter silence, in moments of repose, in the heart of darkness, when we are a little bit afraid, disoriented, off kilter. A strange music that comes from beyond our knowing, a felt meaning. You've heard it. I've heard it. You'd have to be deaf not to have heard it.

Where we differ is how we describe it. Mostly, we give its source a name. Angels. Fairies. Gods or demons. Yahweh. Allah. Father, Son and Holy Spirit. Nixies, E.T.s, shades and shadows. Naiads, dryads, Ariel and Puck. A host of invisible creatures who are, in one way or another, images of ourselves. And, in naming, we are a little less afraid.

And some of us are just content to listen, to take delight. Having woken to the inexplicable mystery of the world- the sounds and sweet airs that give delight and hurt not- we let the music lull us back into a sweet slumber, a kind of dreamless dream, a reverie. Does reverie share a deep root with reverence? I don't know.”
- http://blog.sciencemusings.com/
Posted by CoyotePrime at 7:28 PM