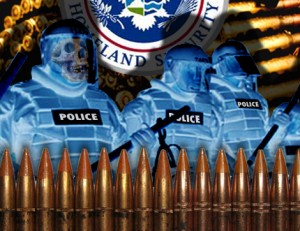 "Something strange is going on. Federal non-military agencies have bought two billion rounds of ammunition in the last 10 months. The Obama Administration says that federal law enforcement agents need the ammunition for “mandatory quarterly firearms qualifications and other training sessions.”

Radio show host Mark Levin is suspicious. He commented: "To provide some perspective, experts estimate that at the peak of the Iraq war American troops were firing around 5.5 million rounds per month. At that rate, the [Department of Homeland Security] is armed now for a 24-year Iraq war. A 24-year Iraq war! I’m going to tell you what I think is going on. I don’t think domestic insurrection. Law enforcement and national security agencies, they play out multiple scenarios. I’ll tell you what I think they’re simulating: the collapse of our financial system, the collapse of our society and the potential for widespread violence, looting, killing in the streets, because that’s what happens when an economy collapses. I suspect that just in case our fiscal situation, our monetary situation, collapses, and following it the civil society collapses, that is the rule of law, they want to be prepared. I know why the government’s arming up: It’s not because there’s going to be an insurrection; it’s because our society is unraveling."

Even though the National Rifle Association says that the amount of ammunition bought isn’t excessive, considering the number of federal agents and the fact that the ammunition is used over a five-year period, there are others who question why the need for so many federal agents. Among them is Jeff Knox, director of The Firearms Coalition, who said: "It’s not the number of bullets we need to worry about but the number of feds with guns it takes to use those bullets. There are currently more than 70 different federal law enforcement agencies employing over 120,000 officers with arrest and firearms authority. That’s an increase of nearly 30 percent between 2004 and 2008. If the trends have continued upward at a relatively steady rate, that would put the total number of federal law enforcement officers at somewhere between 135,000 and 145,000. That’s a pretty staggering number, especially when you consider that there are only an estimated 765,000 state and local law enforcement officers. That means that about one in seven law enforcement officers in the country works directly for the federal government, not a local jurisdiction."
- http://www.breitbart.com/
•
And just WHOM do you suppose they're going to use all these toys on? Martians?