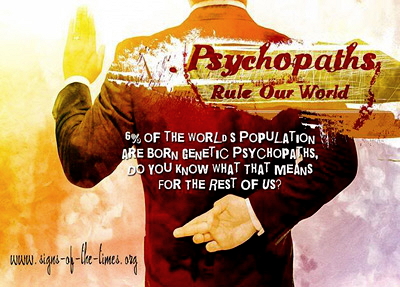 "Political Ponerology:
A Science on the Nature of Evil Adjusted for Political Purposes"
by Andrew M. Lobaczewski

"Imagine - if you can - not having a conscience, none at all, no feelings of guilt or remorse no matter what you do, no limiting sense of concern for the well-being of strangers, friends, or even family members. Imagine no struggles with shame, not a single one in your whole life, no matter what kind of selfish, lazy, harmful, or immoral action you had taken. And pretend that the concept of responsibility is unknown to you, except as a burden others seem to accept without question, like gullible fools.

Now add to this strange fantasy the ability to conceal from other people that your psychological makeup is radically different from theirs. Since everyone simply assumes that conscience is universal among human beings, hiding the fact that you are conscience-free is nearly effortless. You are not held back from any of your desires by guilt or shame, and you are never confronted by others for your coldbloodedness. The ice water in your veins is so bizarre, so completely outside of their personal experience, that they seldom even guess at your condition.

In other words, you are completely free of internal restraints, and your unhampered liberty to do just as you please, with no pangs of conscience, is conveniently invisible to the world. You can do anything at all, and still your strange advantage over the majority of people, who are kept in line by their consciences will most likely remain undiscovered. How will you live your life? What will you do with your huge and secret advantage, and with the corresponding handicap of other people (conscience)?

The answer will depend largely on just what your desires happen to be, because people are not all the same. Even the profoundly unscrupulous are not all the same. Some people - whether they have a conscience or not - favor the ease of inertia, while others are filled with dreams and wild ambitions. Some human beings are brilliant and talented, some are dullwitted, and most, conscience or not, are somewhere in between. There are violent people and nonviolent ones, individuals who are motivated by blood lust and those who have no such appetites.

Provided you are not forcibly stopped, you can do anything at all. If you are born at the right time, with some access to family fortune, and you have a special talent for whipping up other people's hatred and sense of deprivation, you can arrange to kill large numbers of unsuspecting people. With enough money, you can accomplish this from far away, and you can sit back safely and watch in satisfaction. Crazy and frightening - and real, in about 4 percent of the population..." - Martha Stout

"Political Ponerology" is a great book that should be read by everybody as it provides valuable information in understanding why our society has seen a disappearance of human values and an increase in hedonistic behaviours with little care for others. Lobaczewski's great contribution is in showing the process by which people with psychopathic personality disorders congregate and slowly take over organizations, political parties, businesses to finally stifle the whole of society.

It goes to great length in explaining the phenomenon of psychopathy on a macro scale. It deals in a non-judgmental way with the subject of evil. The author clearly lays out the various types of psychopathy and what happens when they combine their various talents and manage to take over a society from the inside and start to rule over normal people in the form of a pathocracy. Though the author primarily deals with examples from his own life experiences under the rule in the former Soviet Union, the parallels to today's world are chilling and very spot on. The book has many footnotes from the editor Laura Knight Jadczyk which clarifies and brings added information to some of the issues dealt with.

The book not only describes the process by which evil takes over but also how it progresses and how normal people can stand up to it. In order to do that, knowledge of the system is needed and that is what this book gives. As the author says at the end of the book then more research is needed, but it is a very profound seminal work that should inspire many to take up this important subject and continue the research. After reading this book I read 'The Sociopath next door' by Martha Stout, 'In Sheeps Clothing' by George Simon, 'The Mask of Sanity' by Hervey Checkley and 'Without Conscience' by Robert Hare, all of whom deal with different aspects of the phenomenon of psychopaths but on a micro scale. Very complimentary!"
- http://www.ebookee.com/
•
FREE Download, in PDF format, of "Political Ponerology" by Andrew M. Lobaczewski is here:
-https://cdn.anonfiles.com/1343645561545.pdf
•
Additional resources: http://www.cassiopaea.com/cassiopaea/psychopath.htm
Posted by CoyotePrime at 11:31 AM