“National Security and Your Digital Data” 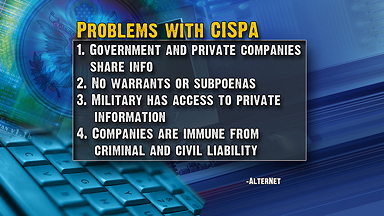 “National Security and Your Digital Data”
by Jeffrey Tucker

“One of the most dangerous threats to liberty and privacy today is called the “Cyber Intelligence Sharing and Protection Act,” or CISPA. The activists slayed this monster last year. Or so it seemed. But of course, the beast didn’t die. Some powerful members of Congress are pushing it again.

CISPA would allow government to force telecommunication providers to cough up your personal data on demand — no warrant, no notification, no chance for you to object. It is being pushed by two members of the House Intelligence Committee, with the support of large swaths of corporate America and the Chamber of Commerce (of course!). The entire bill would serve as an amendment to the national security apparatus. No supporter of CISPA stands up and says, “My bill will wantonly violate the privacy of Americans in the service of Big Government snooping and thieving.” That would be telling the truth. Instead, they say that such a bill is necessary for “our own security.” Unless we get behind this expansion of government power, we will likely become victims of “cyberterrorism” that only our own government can prevent.

Hmmmm. Actually, this whole push — and there are dozens of similar bills floating around — is an attempt by government to regain control of the communication system of which it lost control in the mid-1990s. Communication is one of the “commanding heights” that government must manage if it expects to retain its grip on the population. CISPA is a huge effort toward that goal. It will never succeed in reversing the progress we’ve made, but it can do huge damage to the rights and liberties of people along the way.

To understand the government’s attempts to monitor and control the digital world, you have to take a step back in time. There’s this weird 1947 law passed at the dawn of the Cold War called the National Security Act. It created the CIA, led to changing the name of the Department of War to the Department of Defense (George Orwell would be so proud!), and generally attempted to shore up the military in a time when people were pretty fed up with wartime sacrifices, suffering, and death. It ended up sustaining vast military powers over the public just in time for the Cold War, which President Truman skillfully orchestrated, and defined American political parameters for the next 40 years. The National Security Act was part of a larger attempt by government to survive and thrive in a new epoch.

There were other creations at the time, too. There was the Truman Doctrine, which attempted to contain Russian political influence in Europe. There was the Marshall Plan, which was essentially a gigantic corporate subsidy to American companies hoping to move in on war-torn Europe. And there was the Bretton Woods monetary agreement that made the dollar the world currency and paved the way for a paper-money world.

These were the gifts of this generation to postwar America, and we are still suffering under their awful weight. The catchphrase at the time: Retain control. Do not repeat the error of the past. What was that supposed error? At the end of World War I, a fantastic thing happened on the home front. Censorship went away. The budget was cut. Price controls ended. Even the military budget was slashed. The planning apparatus that had imposed a socialist-style bureaucracy on the public for the duration of the war largely went away. All that was left was the debt.

More interestingly, after World War I, there appeared to be a wave of national disgust at the past war itself. Who started this darn thing? Who thought it was a good idea for 37 million people to die in the name of making the world safe for democracy? Is war just a racket that enriches states and arms dealers at the expense of the public? The questions persisted, and the public developed a voracious desire for war revisionism.

After World War II, the elites who benefitted from the war did not want the same aftereffects. The censorship ended, as did the price controls. The budget was cut dramatically (which, incidentally, produced not economic harm, but, rather, set the stage for a 1950s economic expansion). But one thing that stayed in place was the national security apparatus over the lives of the American people.

And so it has been until very recently. The dawn of the digital age (I like to date this from 1995) created vast new sectors of communication and life itself that live and thrive outside the apparatus of compulsion and coercion. The power elites didn’t plan it this way. Then a revolutionary entrepreneurship took hold that created technologies that have completely changed the world. Smartphones brought miracles to our palms. 3-D printing is upending production systems. Data networks have reformulated the world financial system. And this revolution is intensifying by the day. The way matters are headed, the old-fashioned national state system of controlling us will be a dinosaur in a matter of only a few years.

What good is “national security” for the ruling elites if it only controls a tiny aspect of our lives? If the human population is migrating ever more to the digital world, what control or influence will the government have? The founding document of the national security state — this 1947 law — has no reliable control over the digital world. Surely it must be updated and the newly emerged world must become part of what is controlled!

This is what CISPA is all about.

The lesson of all of this? There is no way to separate the fate of individual liberty from the government’s national security agenda. The target is not really foreign bad guys. The target is you. Maybe there was a time when bills like this would sail through in the name of protecting us. There was a time when the American people feared nuclear bombs from Russia and were willing to surrender their rights and liberties in the hope that government would save us. But these times are different. Suspicion of government is at an all-time high. When the government comes along to say, “We are here to protect you,” there are many active and sophisticated people who know that this is not what’s really going on.

CISPA itself represents one of many massive threats to human liberty. It will have to be defeated again and again, so long as government is around. That’s because it is in the nature of government to want to know all things about us. A free people cannot let that happen.

We’ve all observed over the last 15 years or so that the “anarchy” of cyberspace can manage itself without violating our rights. Indeed, this anarchy is the greatest protection we have against the biggest enemy out there, which is not the cyberterrorists, but those who claim they are here to protect us against them.”
- http://dailyreckoning.com/
Posted by CoyotePrime at 11:01 AM