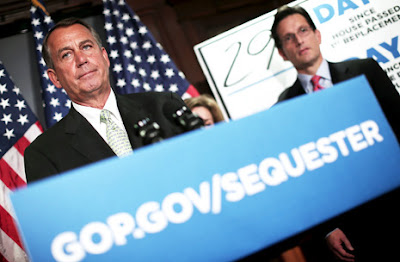 "Boehner Defends Decision to Remain on Ass"
by Andy Borowitz

WASHINGTON (The Borowitz Report)— "Minutes after telling the United States Senate to “get off their ass” to avoid the deep spending cuts that will take effect this Friday, House Speaker John Boehner called an impromptu press conference to announce his intention of remaining on his ass “for the foreseeable future.”

“The United States Senate is showing contempt for the American people by refusing to get off their ass,” a defiant Mr. Boehner told reporters. “And the only fitting way for me to protest their reckless behavior is by remaining on my ass for as long as humanly possible. Take a good look, ladies and gentlemen of the press,” he said, before leaving the lectern in a huff. “This is the last you’ll see of old John Boehner off his ass.”

Mr. Boehner’s words drew a strong rebuke from Senate Majority Leader Harry Reid, who said that Mr. Boehner’s suggestion that the Senate get off their ass while he remained on his “seems like the height of hypocrisy, ass-wise.” True to his word, Mr. Boehner then held an additional press conference, this time sitting in a chair from which he showed no signs of budging."
- http://www.newyorker.com/
Posted by CoyotePrime at 6:09 PM