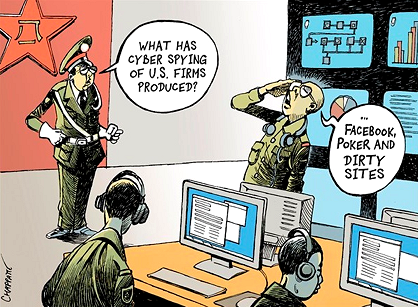 SHANGHAI (The Borowitz Report)— "In a rare announcement from a notoriously publicity-shy group, Chinese hackers revealed today that they were dropping the United States government from their official list of high-value targets. “We have to allocate our time and energy to hacking powerful organizations,” a spokesman for the hackers said. “Right now, calling the United States government an ‘organization’ would be a reach.” He added that the hackers’ ultimate goal had been to hurl the U.S. government into a state of abject paralysis, “and they seem to have already taken care of that on their own.”

U.S. stock markets plummeted on the news of the hackers’ downgrade, which was widely denounced by American politicians as a hostile act designed to cripple the economy. “This is an insult to the American people,” said House Majority Leader Eric Cantor (R-Virginia). “We demand that the Chinese resume hacking us at once.”

But according to the hackers’ spokesman, any chance that they might put the U.S. government back on their list of targets was remote at best. “We need to focus on higher-functioning governments,” he said. “We’re taking a close look at Venezuela.”
- http://www.newyorker.com/
Posted by CoyotePrime at 5:16 PM