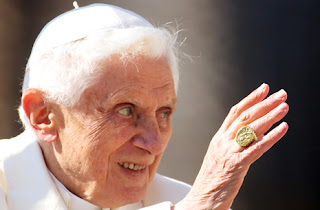 OAKLAND (The Borowitz Report)— “The Vatican’s plan to call the retiring pontiff Benedict XVI “Pope Emeritus” hit a snag today, in the form of a threatened lawsuit by an Oakland-based rapper who has been recording under that name since 2006. “I don’t care who he is, I ain’t let nobody mess with my brand,” said Mr. Emeritus, who prior to 2006 recorded under the name Notorious P.O.P.E.

While the Vatican said it was unaware that Mr. Emeritus had already claimed the name seven years ago, the Oakland rapper scoffed at that idea: “They should have done what I did before I picked it out: Google it.” Furious at what he is calling a clear case of trademark infringement, Mr. Emeritus said that he has no intention of stepping aside for the former pontiff: “He’s the one who should step aside. Call himself P. Biddy or something. This is wack, yo.”

According to a source close to the Vatican, Benedict is likely to choose another name for himself rather than risk a legal tussle with the aggrieved rapper: “The last thing the Church needs right now is another lawsuit.”
- http://www.newyorker.com/
Posted by CoyotePrime at 3:40 PM