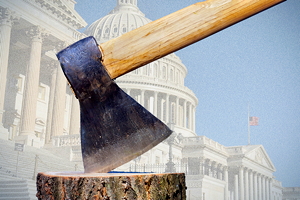 "It's Monday morning in America. That means we're about to endure another week of pointless debate over the precise methods by which our federal government will impose more needless misery on the hapless population, instead of addressing its eminently fixable economic problems. Readers of our nation's newspapers might be forgiven for believing that the citizens of our nation have been condemned to some sort of quotidian hell as punishment for our collective crimes, where we must suffer the pangs of deprivation while listening to endless debates about how best to compound our misery. Which reminds me: Is it time for Meet the Press yet?

The "sequester" debate is the latest stage of an ongoing hostage crisis that's forcing austerity economics on an unwilling population- cloaking it in a false debate about how to do it, not about why we shouldn't do it at all. "The president says he has to have tax increases to head off the sequester," says Republican Rep. Martha Roby. "Well, he already got his tax increase." Rep. Roby is referring to the last "crisis negotiation" over the national budget, which occurred way back in... let's see, when was that? ... Oh, yeah: Seven weeks ago. Time flies- except when it doesn't.

The "tax increases" that the president "already got" were less than the ones which would've taken effect automatically if there had been no deal at all. Well played, sir. Meanwhile, austerity continues to devastate the economies of Europe, sapping the wealth and well-being of the majorities and increasing (rather than lowering) those deified deficits. Austerity's beginning to weave its dark magic here, too. So surely we're finally having the debate we should've been having all along, right?

The president is once again boasting of past spending cuts, even as their harmful effects ripple throughout our economy. He's giving immediate deficit reduction a higher priority than much-needed investment. And he's proposing $2 in spending cuts for every $1 in revenue, which is a pretty right-wing way of going about it. A White House web page lays out the president's "pre-conservativized" negotiating position, thereby ensuring the final result will be even worse. And the web page's heading speaks of a "Last Offer to Speaker Boehner," a phrasing that linguistically places the nation's chief executive in the position of supplicant to the leader of the lower chamber of the legislature.

The president is insisting on $100 billion in cuts to Social Security payments for the elderly and disabled- an offer that Republicans have shrugged off but which he has placed back on the table again and again. Those offered cuts are accompanied by other proposed cuts to Medicare, which seem to include limitations on choice of medical provider. (We'll be looking for clarification in the next few days.) The president is also proposing further cuts to the postal service, which will mean more lost jobs. And some of his "nondiscretionary savings"- e.g., "reform TSA security fees" and "strengthen solvency of UI (unemployment) trust fund"- look a lot like regressive taxation that's been run through Mr. Orwell's Newspeak machine.

For context, the president is making these offers in an economy that lost more than $10 trillion to the predations of Wall Street. And as he does so, the Crazy Train is now arriving on Track "R." Republicans, who continue to chant the Reagan mantra that "government is the problem," are still pursuing its wholesale elimination. In that context the president's counterproposal reads like a request for a more orderly dismantling of the State than the one the Visigoths envision.

Nobody's discussing the vital role that government has played in creating a better future- after the Great Depression, during the postwar years- and can play again. The president did it, and very effectively, in the State of the Union. But that was a speech. This is governance.

And as this stupid game goes on- how much do we cut, and where?- Washington's past flings with austerity madness are already carving chunks out of our economy. The GDP, which grew 3.2 percent in the third quarter of 2012, shrank by 0.1 in the fourth quarter as their cuts began to take effect. The official unemployment rate ticked up to 7.9 percent last month. (That's nearly double the 4 percent rate that was once considered an appropriate national goal.) The economy added 157,000 jobs, will is roughly half the number needed to address the unemployment crisis in any meaningful fashion. UE6- the best measure of real employment- stood at 14.4 percent. (That figure was 7.9 percent at the end of 2006, the year before the crisis erupted.)

Consumer confidence is plunging- and why wouldn't it? Nobody's offering to help the average consumer. And if consumers don't feel confident enough to spend, the jobs economy (as opposed to the financial/speculative economy) will continue to wither.

Meanwhile, the wealthy have taken all the spoils of the post-crisis recovery, and then some, leaving middle class and impoverished Americans with less of our national income than they had before. That translates into tens of millions of disrupted lives- lives that aren't even being discussed in the "sequester" debate.

One of the meanings of the word "sequester," according to Merriam-Webster, is "to requisition and confiscate." Another is "to remove or set apart," which is a surprisingly accurate description of Washington's relationship to the rest of the nation as it indulges in this meaningless- and, by implication, confiscatory- exercise. As Paul Krugman keeps saying, "This isn't rocket science. We know how to do this." There is a clear formula for short-term government investment that can create jobs, stimulate growth, increase prosperity, and create new opportunities to advance economically. And since we know how to do this, that leads to only one conclusion as we watch the debate in Washington:

They don't want to.

It's a game- a stupid and destructive game whose cheerleaders are vapid and flippant thugs like Alan Simpson or pampered and self-satisfied hedge-funders like Erskine Bowles. The president could demand an end to the game. He could say that the sequester must be shelved permanently, right now, and then make the case for investment to heal our economy. Instead he's playing this stupid game with the rest of them. If he won't put an end to this shallow and destructive game, this foolish substitute for a real economic debate, then the public will have to demand it."
- http://www.huffingtonpost.com/
•
Related: “Should You Fear The Sequester?”
- http://www.salon.com/2013/02/19/should_you_fear_the_sequester/
Posted by CoyotePrime at 12:51 PM