"The Case of the 5-Year Old Bubble Gun Terrorist" "A few weeks ago in the Land of the Free, a five-year-old girl in Pennsylvania was labeled a terrorist threat. Fortunately for the citizens of Northumberland County, local authorities managed to detain this nefarious kindergartener before she could exact her villainous deeds on thousands of innocents. Authorities were tipped off after someone overheard a conversation between the girl and one of her classmates in which she mentioned plans to shoot people… with a bubble gun. Administrators at her local elementary school questioned the girl alone without her parents for 30 minutes. She was then labeled a ‘terrorist threat’ and sentenced to a ten-day suspension.

Now, it’s quite fortunate for the child that she was granted a reprieve, albeit a small one, from state sponsored brainwashing. Public schools stamp out children’s creativity and independence, replacing them with obedience training and state propaganda. It’s truly incredible, though, that the police state security culture has gotten so out of control. And that, as a collective, American society has really become scared.

The government has pulled an amazing mind job. In just over a decade, the home of the brave is now terrified of men in caves, and five-year old girls with bubble guns. 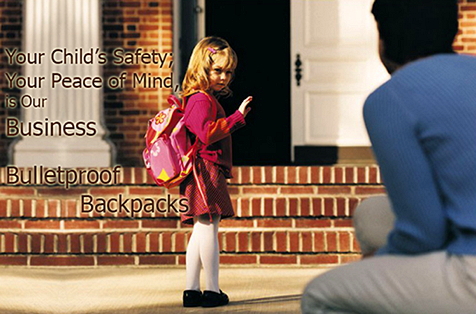 THIS is what we've become? - CP

[Ed. Note: As scary as this situation was, and as ridiculous as it turned out to be, the only “silver lining” in the story that we could see, was that the 5 year old girl wasn’t detained and questioned by authorities. We’ve seen instances of children being questioned by police for actions that 20 years ago would have been considered simple horseplay, foolish, or (literally) childish.]

Technological advances in audio and video surveillance usher in a whole new set of data for administrators and military personnel to store and archive.Technology that allows a unmanned aerial vehicle the ability to zoom in and read a candy wrapper from over 3 miles away. Or listening posts on city streets disguised as streetlights recording conversation of unsuspecting citizens. Or my personal “favorite” video cameras attached to police officers sunglasses to record conversations or any activity they see fit.

We’re not interested in this type of supervision by faceless authorities. And we guess you feel the same way. Which is why we launched a petition last week to show our opposition to John Brennan’s nomination as CIA director. Brennan is on record as a “pro-drone” guy and supports filling American air space with them, for your protection, of course. Interestingly, when he was pressed by Rand Paul about killing terrorists on U.S. soil who just happen to be American citizens he refused to answer.

So far, we’ve gathered over 7,000 signatures, all of which we will send to members of Congress and the President, himself. So far, luck has been on our side. The Senate Intelligence Committee held off the vote last week, and Congress was in recess all of this week. But when they come back on Monday, I’m sure they’re going to make this confirmation a priority.

If you haven’t signed the petition already, you can do so here.  And if you have already signed it, please take a second to forward the link around to your friends and family. Posting it on Facebook or some other social media will make sure that more people aware of the situation.

On the flip side, it was also reported that a fifteen-year-old boy in New Mexico had killed members of his family with “military-type assault rifles.” Given the President’s second coronation recently, all of this adds up to an inescapable conclusion, about firearms: whatever form it takes, it’s going to be more government control, less individual freedom. (As an aside, it’s also possible that the President is playing up the gun control issue in order to win some bargaining chips in the debt ceiling negotiation, i.e. “I’ll back off gun control, you vote in the tax and debt ceiling increases…” Either way, it’s a major loss for the country.)

Ultimately, though, it doesn’t matter; technology is rapidly making our entire concept of government obsolete. And irrelevant. Think about it. We live under a system where, simply from being born on a piece of dirt, citizens are obliged from birth to pay taxes on our worldwide income, fight and die in foreign wars, pay down the massive debts of our forefathers, etc. None of which we volunteered for.

It’s crazy. This system may have made sense several hundred years ago… the nation state was a natural progression from the days of kingdoms and empires, where people swore allegiance to a genocidal king. Today, we pledge allegiance to a piece of dirt, to institutions run by criminally incompetent politicians, to neighbors we’ve never met, and to a society that no longer shares our values.

Again, though, technology is rapidly making this system obsolete. With modern travel and telecommunication, geography hardly matters. We can now forge relationships with people across the globe. Money can be moved across borders in an instant. Many countries offer big incentives to attract foreign residents. In today’s world, we can live in one country, earn income and do business in another, hold savings in another. This chain can go on almost forever. We can store our gold in another. Receive high quality, inexpensive healthcare in another. Store ‘digital assets’ in another. Etc. These are no longer tactics of the wealthy. Technology makes this all possible for nearly everyone, if you have the right information.

Technology also does something else: it makes laws irrelevant. Case in point– a couple of smart guys have figured out how to use 3D printing technology to create high capacity magazine clips. Bear in mind, President Obama wants to ban high capacity magazine clips in the Land of the Free. But how effective will his law (or royal decree) be when any ole’ chap can just go and 3D print his own magazine from scratch?

Technology has advanced far beyond the government’s ability to control people and their behavior. Laws are becoming irrelevant. Politicians are becoming irrelevant. Geography is becoming irrelevant. This is another major trend of our lifetimes. And it will end up with people thankfully co-existing in free communities of like-minded people with whom they share core values, instead of the same passport."
- http://dailyreckoning.com/
This article was originally posted on http://www.sovereignman.com/
•
And without any protest, at all... - CP 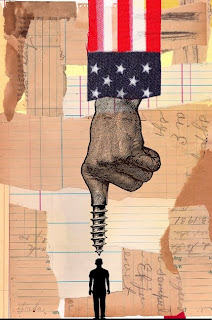 Posted by CoyotePrime at 2:37 PM