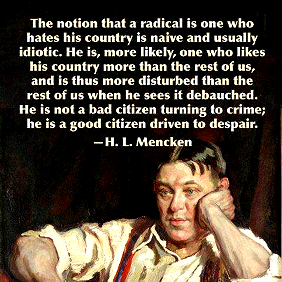 “The government consists of a gang of men exactly like you and me. They have, taking one with another, no special talent for the business of government; they have only a talent for getting and holding office. Their principal device to that end is to search out groups who pant and pine for something they can't get and to promise to give it to them. Nine times out of ten that promise is worth nothing. The tenth time is made good by looting A to satisfy B. In other words, government is a broker in pillage, and every election is sort of an advance auction sale of stolen goods."
"All government, in its essence, is a conspiracy against the superior man: its one permanent object is to oppress him and cripple him. If it be aristocratic in organization, then it seeks to protect the man who is superior only in law against the man who is superior in fact; if it be democratic, then it seeks to protect the man who is inferior in every way against both. One of its primary functions is to regiment men by force, to make them as much alike as possible and as dependent upon one another as possible, to search out and combat originality among them. All it can see in an original idea is potential change, and hence an invasion of its prerogatives. The most dangerous man to any government is the man who is able to think things out for himself, without regard to the prevailing superstitions and taboos. Almost inevitably he comes to the conclusion that the government he lives under is dishonest, insane and intolerable, and so, if he is romantic, he tries to change it. And even if he is not romantic personally he is very apt to spread discontent among those who are.”
- H.L. Mencken
Posted by CoyotePrime at 5:55 PM