"As a young man, I voraciously read George Orwell's "1984", Aldous Huxley's "Brave New World" and Alvin Toffler's trilogy which included "Future Shock", "The Third Wave" and "Power Shift". During the era of the Vietnam War, I wondered seriously about the future and how it was destined to unfold. Now being considerably older, I have the vantage point to reflect back on my early ruminations and expectations. Unfortunately, I am too old to alter the lessons that are now so painfully obvious. Instead, I pass the gauntlet to those who can understand and take action on what I have unavoidably come to expect for America. 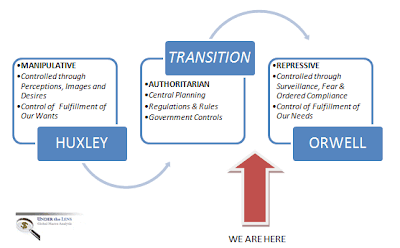 The 'Huxley-Orwell' Transition: I recently read a perceptive paper by Chris Hedges that would have made any English Professor envious, powerfully philosophical but not something an Economics department would pay much attention to. I found it both intriguing and enlightening. I have borrowed so heavily from it, that I am unsure where the lines diverge. Therefore, I give full credit to Chris Hedges and take full credit for all the bad ideas. Chris Hedges of TruthDig.com wrote "2011: A Brave New Dystopia", from which the following evolved.

The two greatest visions of a future dystopia were George Orwell's "1984" and Aldous Huxley's "Brave New World." The debate, between those who watched our descent towards corporate totalitarianism, was who was right. Would we be, as Orwell wrote, dominated by a repressive surveillance and security state that used crude and violent forms of control? Or would we be, as Huxley envisioned, entranced by entertainment and spectacle, captivated by technology and seduced by profligate consumption to embrace our own oppression? It turns out Orwell and Huxley were both right. Huxley saw the first stage of our enslavement. Orwell saw the second.

We have been gradually disempowered by a corporate state that, as Huxley foresaw, seduced and manipulated us through:

While we were entertained, the regulations that once kept predatory corporate power in check were dismantled, the laws that once protected us were rewritten and we were impoverished. Now that credit is drying up, good jobs for the working class are gone forever and mass-produced goods are unaffordable, we find ourselves transported from "Brave New World" to "1984."

The state, crippled by massive deficits, endless war and corporate malfeasance, is clearly sliding toward unavoidable bankruptcy. It is time for Big Brother to take over from Huxley's feelies, the orgy-porgy and the centrifugal bumble-puppy. We are transitioning from a society where we are skillfully manipulated by lies and illusions to one where we are overtly controlled.

Huxley, we are discovering, was merely the prelude to Orwell. Now that the corporate coup is over, we stand naked and defenseless. We are beginning to understand, as Karl Marx knew: “Unfettered and unregulated capitalism is a brutal and revolutionary force that exploits human beings and the natural world until exhaustion or collapse.” We are one crisis away from a police state. All the powers are in place. Someone will flip the switch. Whether a Cyber Attack, escalating Currency War tensions or a 'terrorist' attack by indebted college youth, it is only a matter of time and circumstance.”
- http://www.marketoracle.co.uk/Article39449.html
Posted by CoyotePrime at 12:20 PM