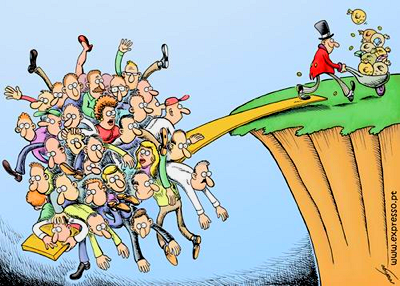 "A new study by a team of economists in academia and the government has concluded that economic inequality is a permanent—not temporary—feature in the United States, based on an analysis of 350,000 federal income tax returns between 1987 and 2009. “For household income, both before and after taxes, the increase in inequality over this period was predominantly, although not entirely, permanent,” the highly technical report concluded. “We also find evidence that the U.S. federal tax system helped reduce the increase in household income inequality; but this attenuating effect was insufficient to significantly alter the broad trend toward rising inequality.”

Simply put, the study confirms what Vermont's U.S. Sen. Bernard Sanders has been saying for years, “The rich are getting richer and the poor are getting poorer.”

“The takeaway here is rough,” the Washington Post’s Ezra Klein wrote in his Wonkblog column. “The reason the permanent/transitory distinction matters is that lifetime earnings are much more important than a single year’s earnings. It’s lifetime earnings that decide how you live in general, what sort of house you can afford, whether you can send a kid to college, whether you can retire comfortably.”

Better-off Americans often opine that those below them on the economic ladder should just work a little harder. But this study suggests that there are irreconcilable gaps in income, lifetime wealth, consumption and the resulting health between the haves and have-nots in America. It also suggests progressive taxation can buffer those inequalities a bit, but not make up for the gaps.

It will be curious to see if this study will be cited in Washington’s ongoing debate about 'reforming' entitlement programs—namely Medicare and Social Security. It suggests, if anything, that growing slices of American society are heading to less financially secure futures, especially in old age. That means federal safety nets are more needed than ever—despite the GOP’s ideological crusade to cut spending on them.”
- http://www.alternet.org/
Posted by CoyotePrime at 5:48 PM