"Deposit 'Taxes': Should We Prepare?" 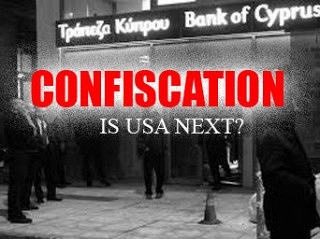 "Deposit 'Taxes': Should We Prepare?"
By Douglas French

"There’s no way it could happen in the United States. That’s the conventional wisdom on this side of the pond about the ECB’s bailout of the banks in Cyprus. That caper looks as if it may take a chunk out of the hides of at least some bank depositors on the tiny Mediterranean island. So far, the Cyprus parliament can’t pull the trigger on a plan to tax insured and uninsured bank deposits to pay a share of the bailout. However, a bank holiday has been declared and Cypriot depositors are nervous, taking all they can from ATMs. The Cypriot banks, loaded with Greek debt, are on the verge of collapse.

William Isaac, a former chairman of the FDIC, calls the idea of taxing insured deposits in the U.S. “unthinkable.” He went on to tell American Banker, “I can’t believe the Europeans were that insensitive to the psychology of depositors throughout the world. They have a government pledge to cover these people, and they’ve reneged on it.” At the same time, Isaac says governments have a right to give a “haircut” to (aka steal from) uninsured depositors. He adds, “But I would question in light of the worldwide financial instability over the past five years whether this is the right time to make that move, particularly without any notice.”

In the good old US of A, the Federal Deposit Insurance Corporation (FDIC) has an unbroken track record of repaying insured deposits, as the American Banking Association is quick to remind us. “While the crisis in Cyprus is a real concern for depositors in Cypriot banks, it has no implication for depositors in U.S. institutions.” You gotta believe it because, see, the FDIC has $33 billion in reserves to handle such occasions. Banks pay into the fund each year to make sure there is money to repay depositors. The ABA states, “Simply put, U.S. insured depositors are safe and their deposits are protected by a strong FDIC fund, a financially secure banking system and the full faith and credit of the U.S.”

OK, but while $33 billion sounds like a lot of money, total domestic bank deposits in the U.S. stand at over $9.4 trillion. Of that, $7.4 trillion are insured. That means the FDIC’s reserve fund provides 45 basis points (a basis point is 1/100th of 1%) worth of coverage. Only a bank trade group would characterize that coverage as “strong.”

And just how financially secure is the banking system? Over at The New York Times, Floyd Norris makes the point that if the big banks in the U.S. used the same accounting rules as Europe, U.S. banks would be much bigger. But more to the point, it would be apparent that JP Morgan (for instance) is an even bigger financial edifice teetering on the head of a pin. JPM has $2.4 trillion in stated assets, but it also has derivatives with an additional market value of $1.5 trillion not listed on their balance sheet. So instead of being leveraged at 11.6-to-1 and being well capitalized, JPM is employing leverage at just short of 19-to-1 and is a dicier proposition. Nothing can go wrong when leveraged at 19-to-1.

That’s OK. JPMorgan head man Jamie Dimon is supposed to be the smartest guy in the room. Not according to Jim Rickards, however, who told Maria Bartiromo and Bill Griffeth on CNBC that Dimon makes money only because of government subsidies and doesn’t understand the risks of derivatives. The author of Currency Wars shocked the CNBC anchors saying, “Having Jamie Dimon as CEO is like having a welder in charge of a hospital. You don’t want someone working on your heart with a blowtorch.”

You might wonder why JP Morgan and their peers don’t have to count the derivatives. Well, as Norris explains: “Under American accounting rules, banks that deal in derivatives can net out most of their exposure by offsetting the assets against the liabilities. They do this based not on the nature of the asset or liability, but on the identity of the institution on the other side of the trade — the counterparty, in market lingo. The logic of this has to do with what would happen in a bankruptcy. What are called ‘netting agreements’ allow only the net value to be claimed in case of a failure. So the bank shows the sum of those net positions with each party.”

Of course, no one knows for sure the strengths and weaknesses of their counterparties in a pinch. The three simple letters that remind us are A-I-G. The notional amount of derivatives in federally regulated institutions at the end of last year was $224 trillion, nearly 10 times greater than the derivatives exposure at banks in the dark ages of 1997, which was $25.4 trillion at year-end.

The accountants were going to blow up this whole netting exercise thing a few years ago. The bankers got them to back off. Most derivatives positions are disclosed in the financial footnotes, but repo and reverse repo positions are not. According to Norris: “The sort-of invisible derivative assets and liabilities are only part of the reason that it is so hard to really get a handle on just how risky any given bank is. Regulators look at banks’ ‘Tier 1 capital ratios,’ in which they divide capital by ‘risk-weighted assets.’ They get high numbers.”

A 300-page report prepared for the Senate concerning JP Morgan’s $6.2 billion loss contends the bank hid the loss from regulators and investors. Of course, if you’re the smartest guy in the room like Mr. Dimon, you can make the numbers up as you go and tell investors it’s all a “tempest in a teapot.” Just what were those London Whale trades? The subcommittee report described the portfolio as a “make-believe voodoo magic composite hedge.”

Bank earnings in 2012 were the second highest ever. But the largest contribution to earnings came from reduced provisions for loan losses, plus increased trading revenue and asset sales. Another downturn and this all reverses itself in a hurry.

Finally, the last line of defense for U.S. depositors is the full faith and credit of the U.S. government. Uncle Sam is an entity with over $16 trillion in direct obligations and is currently running an annual deficit of somewhere around $1 trillion, give or take. Social Security and other promises stretch the total obligations to numbers beyond comprehension.[They do: How about $222 TRILLION? - CP]

On the plus side, for now, dollars can be created ad infinitum from nowhere. That’s the real problem. The Cypriots can’t print their own money and are depending upon the kindness of strangers. Americans should take a lesson from the Cypriots, just in case one of these days the product of Uncle Sam’s printing press is not so welcomed and the notion of “unthinkable” is tested.
- http://dailyreckoning.com/
Posted by CoyotePrime at 12:06 PM