Karl Denninger, "Cyprus: Once Again, For Those Who Are Sleeping" 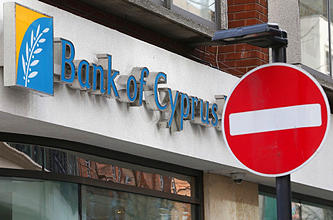 "Cyprus: Once Again, For Those Who Are Sleeping"
by Karl Denninger

"I know it's considered impolite to repeat yourself but you need to at times like this because the commentary on the Cyprus situation continues to miss the mark to the point that it appears to be intentional.

The controls may include a ban on cashing checks and carrying more than 3,000 euros ($3,830) in cash across borders, Phileleftheros reported today, citing a draft Finance Ministry decree. The measures will last for seven days from when the decree is published and apply to all accounts and payments regardless of currency, the Nicosia-based newspaper said. Cyprus’s lenders have been closed since a March 16 plan by the European Union to force losses on all depositors in exchange for a 10 billion-euro bailout touched off a political upheaval. While parliament rejected that plan, a subsequent agreement shuts Cyprus Popular Bank Pcl (CPB), the nation’s second-largest lender and imposes larger losses on uninsured depositors.

The issue is not whether investors should take the loss when there is a bank failure. They should.  It is whether the ECB and other institutions that are holding or guaranteeing bank debt are being protected while others are being hit. That cannot be allowed. That you're a government or quasi-government agency does not make you "superior" in the capital structure.  This is the exact scam that was run with GM and it has to stop. The ECB must take the same loss as anyone else holding those bonds, as must any other bank.

The depositors relied on a ECB and government claims of both insurance and solvency. In short, they were lied to. The insurance is being honored but the false claim of solvency is not.  This isn't an "opinion" it is a formal declaration coming from a government intended to keep people from pulling their money- that is, it's intended that you rely on these so-called "opinions." If you're going to issue such pronouncements under the premise that people should rely on them then you must be held to account when it turns out you're full of crap.

I have absolutely no problem with a banking relationship that has in big bold print the statement that there is no guarantee on deposits, that you can lose money, that it may all go to hell on you from the first day.  That's fine but that's not what's presented in banks across the land.  Instead what you see on the door is the FDIC insurance seal and nowhere in the account documentation is there a statement that you are an unsecured creditor, senior or not, in the bank for deposits in excess of the insured amount.

Further, our Treasury Secretary repeatedly, along with Ben Bernanke, has showed up on TV to tell us all about how safe and strong our banks are, as have the governments of other nations.  If these people are going to make statements like this they need to be held to account when they're lying about them.

Investing is all about risk management.  But today banking cannot be about a "free market" for risk and reward because (1) governments lie about the solvency of the banks, (2) governments intentionally allow banks to mark assets to fantasy values, thereby creating the illusion of solvency where it does not exist, (3) government agencies are often directly complicit when banks do outrageous things to misrepresent their capital status (e.g. what IndyMac did with backdating deposits, and the evidence is that the OTS examiner involved knew about it!) and then (4) when said banks get in trouble someone, other than the people who made the false statements and issued the fantasy garbage, get the bill.

I am not arguing for bailouts.

I am arguing for prison sentences, asset forfeiture and corporate death penalties for those who mark assets to fantasy values or who hold things "off balance sheet" and otherwise obfuscate the truth, making it impossible for  an investor or depositor to determine whether a given institution is safe or not.

I am arguing for prison sentences and the personal and very real corporal death penalty for government agencies and employees who conspire in these lies, because it is only through the use of implied force that government maintains a monopoly on that such frauds are turned into "ordinary business practices."  The offense is thus doubled- not only is the public misled they are then actively screwed when the truth is discovered so the banksters can keep the loot. This is exactly what happened in Jefferson County Alabama where despite some of the local people going to prison nobody from the bankster side was prosecuted.

In short, I am arguing that when a corporate actor does a bad thing, they must face the same punishment for robbing the people by deceit as someone does who rooks a nice old Granny out of her life savings, because the crime is exactly identical. And when a government actor conspires in such an act he or she must be exposed to the ultimate penalty just as we issue a death sentence upon someone who targets our financial system with an airplane that they fly into a building on purpose, as the intended and executed crime- the destruction of the many for the political and personal power goals of the few- is exactly identical."
- http://market-ticker.org/
Posted by CoyotePrime at 11:46 AM