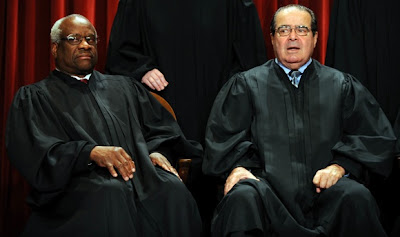 WASHINGTON (The Borowitz Report)— “Justice Antonin Scalia dropped a bombshell on the Supreme Court today, announcing his decision to resign from the Court “effective immediately” and leave the United States forever. Calling this week “by far the worst week of my life,” Justice Scalia lashed out at his fellow-Justices and the nation, saying, “I don’t want to live in a sick, sick country that thinks the way this country apparently thinks.” Justice Scalia said that he had considered fleeing to Canada, “but they not only have gay marriage but also national health care, which is almost as evil.” He said the fact that nations around the world recognizing same-sex marriage are “falling like deviant dominoes” would not deter him from leaving the United States: “There are plenty of other countries that still feel the way I do. I’ll move to Iran if I have to.”

Throwing off his robe in a dramatic gesture, Justice Scalia reserved his harshest parting shot for his fellow-Justices, screaming, “Damn you! Damn each and every one of you to hell! You call yourself judges? That’s a good one. You’re nothing but animals!” Breathing heavily after his tirade, he turned to Justice Clarence Thomas and said, “Except you, Clarence. Are you coming with me?” Justice Thomas said nothing in reply.”
- http://www.newyorker.com/
Posted by CoyotePrime at 1:19 PM