Satire: “Cheney Marks Tenth Anniversary Of Pretending There Was Reason To Invade Iraq” 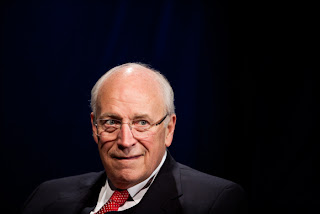 HOUSTON (The Borowitz Report)— "In a sombre ceremony attended by former members of the Bush administration, the former Vice-President Dick Cheney marked the tenth anniversary of making up a reason to invade Iraq. The ceremony, held on the grounds of the Halliburton Company headquarters, brought together the former Defense Secretary Donald Rumsfeld, the former Secretary of State Condoleezza Rice, the former Deputy Secretary of Defense Paul Wolfowitz, and other key members of the lying effort.

Calling the assembled officials “profiles in fabrication,” Mr. Cheney praised them for their decade of dedication to a totally fictitious rationale. “Making up a reason to invade a country is the easy part,” Mr. Cheney told them. “Sticking to a pretend story for ten years—that is the stuff of valor.” Mr. Cheney added that their “steadfast charade had raised the bar for all future administrations.” “When it is time to invade Iran or Venezuela, will the President have the will to make up an entirely fake reason to do it?” he asked. “That remains to be seen.”

The ceremony ended on an emotional note, as Mr. Cheney placed a wreath on the Tomb of the Unknown W.M.D. Former President George W. Bush, who was said to be otherwise engaged, was represented at the event by a nude self-portrait.”
- http://www.newyorker.com/
Posted by CoyotePrime at 12:44 PM