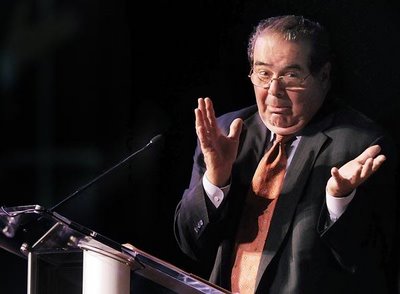 (The Borowitz Report)— "As the Supreme Court prepared to hear two cases involving same-sex marriage this week, Justice Antonin Scalia said that he would not allow his votes to be influenced “in any way” by his lifelong fear of gays. “As Justices of the Supreme Court, we have a sacred duty to check our personal feelings at the door,” he told the Fox News Channel. “In my case, that means putting aside my longstanding and profound fear of homosexuals.” Justice Scalia added that he was committed “to safeguarding the rights of all Americans—even those I personally find terrifying. I take my role as an impartial arbiter very seriously,” he said. “So when I hear a case, I put all feelings of abhorrence, disgust, and revulsion completely out of my mind.”

The Justice said that when it came to the issue of same-sex marriage he would rely on the Constitution, “which makes no mention of gays whatsoever. Remember, when the framers wrote the Constitution, there were no gays in America,” he said. “They didn’t come here until the nineteen-sixties.” All in all, he said, advocates of same-sex marriage should rest assured that he will listen to this week’s arguments with an open mind: “I’m going to apply the same robust sense of fairness that I’ve brought to cases involving blacks and women.”
- http://www.newyorker.com/
Posted by CoyotePrime at 7:04 PM