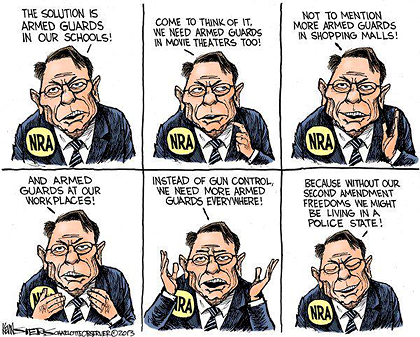 The N.R.A. leader said that he expects his organization to continue to take an active role in the national conversation about guns as it moves forward: “We want to talk about an assault-rifle ban. We want to talk about background checks. We want to talk about anything else that we know will never happen.” But while Mr. LaPierre “can’t believe how well the national conversation is going,” he said that the N.R.A. would remain vigilant in keeping the conversation from “veering off into concrete remedies that will actually change things. We’ve had five months of talk, and that’s a good start,” he said. “But now is the time for more talk."
- http://www.newyorker.com/
Posted by CoyotePrime at 6:59 PM