“Who Knows What Evil Lurks?” 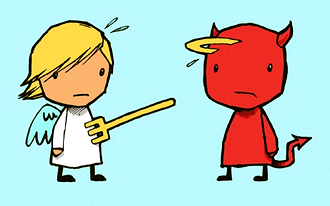 “Who Knows What Evil Lurks?”
by Andrew Bard Schmookler

"I recently had an interesting experience writing a piece for an American newspaper that’s published me over the years. In my piece, I addressed the puzzle of why it is that some of the most remarkably decent people I know have supported an American leadership that’s itself remarkable precisely for lacking such decency. To that puzzle I proposed an answer in two parts. For one thing, I suggested, these good people have been seduced by leaders expert in displaying the trappings of righteousness—leaders good at using the flag and the postures of faith to distract from the lying and bullying and arrogance they also enact right before our eyes. But it’s the second part of the answer that made my experience with this commentary itself a story worth telling.

Part of why these good people can be seduced by a bad leader, I said, is that part of them welcomes the seduction. A leader can give people an opportunity to express—vicariously, in the name of the glorious Us”— forbidden impulses that they’d never allow themselves to act on as a Me” in their individual lives. And it is precisely those people who are most extraordinary in their hewing to the straight-and-narrow path who are likely to be most vulnerable to the temptation presented by a leader who can disguise the forbidden in the garb of virtue. The same strict upbringing that can produce exceptionally impeccable conduct can also make a person a stranger to those parts of themselves they’re required to suppress.

What’s not integrated into the personality does not disappear, but instead becomes a point of vulnerability. History has shown that among the most dangerous leaders are those adept at giving hidden expression to people’s forbidden desires.

My piece was scheduled for publication. But then a higher-up spiked it, saying that it was not appropriate to allege any moral or psychological shortcomings to any group of this president’s supporters. Now, if it were just this newspaper man, I wouldn’t think this reticence to publish such an argument signified much. After all, prudence might lead a journalist to hesitate to offend a constituency that, these days, seems animated by an angry and vengeful spirit. But I also heard some of this from my own circle of colleagues who customarily vet my writings before I go public. For this past year, as I’ve been taking on the ruling powers these people also oppose, they’ve generally been cheering me on. But several of them balked at the idea that there might be anything dark in our fellow Americans that these dark powers are giving expression to.

That’s what I find interesting here. It seems to me another sign of that inability in today’s America —particularly among liberals—to confront the dark dimension of human affairs. The idea that if the human creature is confined in too tight a cage, there might be subterranean feelings of vengeful rage would have been no news to Nietzsche, or Freud, or Jung. Why is it not credible to us?

We’ve lived our whole lives in the shadow of that terrible twentieth century discovery that decent people in a civilized society might be willingly complicit in atrocity. Why should it be so surprising that Americans, too, might have their dark sides? We’ve seen normal people slaughter their neighbors in Bosnia and Rwanda, summoned by destructive leaders to supposedly righteous causes. Why should it be out of bounds to imagine that an American leader could bring out of his followers, collectively, the worst of their potentialities? Our dominant religion declares that we are all sinners. So why should it be implausible that a political force might gain its fuel from tapping into that sinful side?

That old-time radio show used to ask, "Who knows what evil lurks in the hearts of men?” The answer, these days, seems to be: I don’t want to know.”
- http://www.nonesoblind.org/
•
- http://www.youtube.com/watch?v=uMlRpN8ANrU

Posted by CoyotePrime at 5:30 PM