What a month... near economic collapse in Cyprus giving us a taste of what's going to happen to our bank accounts here when things start to really fall apart (Bitcoin, anyone?), people blowing up people with bombs, badly maintained factories (inexplicably built near homes) exploding, Chicago under water, and a government that's 100% unresponsive and useless to anyone who isn't lining their pockets.  Time to revisit Maslow’s Hierarchy of Needs for some tips on how to live the calmest life possible for people who aren't able to leave the States. 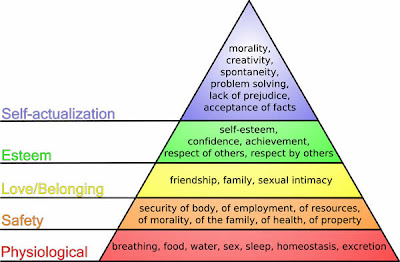 We're up to the Safety Level. The theory is that if you aren't secure - you won't be equipped to experience anything in your life shown on the levels above (let alone physically survive). It’s a path to happiness that's firmly entrenched in reality, not religion. Here are some quick tips on tackling the second level of the pyramid for an American.

Security Of Body:  Realize you're living in a police state where a lot (a LOT) of people have guns and aren't afraid to use them (especially the police), so watch where you go and when you go there. Get a long deadbolt lock for your door and a peephole so you can see who's knocking. Stop thinking that anywhere in the US is like it was in the 1950s no matter how rural. Don't ever open your door to someone unless you know who they are. Get to a gym - be fit so you can run if you have to, and maybe even take a self-defense course. Lock your car doors always and carry a whistle so you can freak someone out if they seem threatening and perhaps they'll leave you alone. And in the big cities, don't walk down quiet streets alone late at night. Walk with a friend or drive.

Security of Employment: DON'T expect a corporation you take a low-wage hourly job with to take care of you in any way, shape, or form. Don't work extra hours to impress them - use to foster your own happiness. It's not their job to take care of you. Their job is to make money for their executives and shareholders. That isn't cold, it's just the truth. And as I said last time, and I can't stress it enough, create your own income providing a product or service that's needed in your community.

Security of Resources: I'll be honest. I don't have a clue what this point is driving at. Perhaps security of resources involves a backup plan. A network of friends, family, and business associates you can use as a resource (probably to help you with security of employment if you can't make your own work).

Security of Morality: The only thing I'll say about this is that if you have no integrity, eventually no one will want to deal with you personally or professionally and you'll be alone. That DOESN'T include credit card debt or medical debt, if you can't pay that, walk away. It's not a moral issue even though they'll try to make you think it is. Bottom line: if you can look yourself in the mirror in the morning without feeling ashamed, you're probably doing ok.

Security of the Family: If I see one more 3 year-old kid wandering around without a parent nearby I'm gonna lose it. Stop that. Keep your little kids close and don't leave them or your pets in hot cars this summer. They will die. And remember that pets are part of your family too. Treat them with respect — they aren't fashion accessories. Always know where your kids are and who they're hanging out with and be there for them if they need to talk. Make sure if times are tough for you that you save up extra food when you have extra money so during the lean weeks you can eat.

Security of Health: A lot of middle class people in the US don't have health coverage and the prices the doctors and hospitals are charging for medical services these days are pure extortion. Hygiene is the number one reason people started to live past 45 in the 20th Century. If you have a wound, clean it and keep it wrapped so it won't get infected. Take a damn shower every couple days at least, and get enough sleep so your immune system doesn't start to fail you. Even if you're poor, eat less, but don't eat junk - no aspartame, no high fructose corn syrup and if you're overweight cut out all bread and pasta (substitute the long acting carbs from grains with veggies) and you'll be amazed how much weight you lose.

Security of Property: Lock your doors, make sure your smoke detectors are working, don't leave your stove on when you go out, and y'know what the best way to secure your property is? Get to know your neighbors so you can watch each other's backs.

I'm going to visit another level of Maslow’s Hierarchy of Needs every other month this year and give you advice on how to get to the top and survive living in America. It gets a bit more complicated as we move forward, just like living here in this very strange place. Our middle and lower class Slaveys can’t get out anyway, so it’s time to make the best of it!”
- http://www.marketoracle.co.uk/Article40130.html
•
Slavey makes his middle class living on a contract basis in Southern California. He's not poor but definitely not rich - and plans to stay in California for the duration of the economic collapse. The opinions and advice in Dear Slavey should always be checked by your own experts, but has guerrilla style street-smart advice for middle class people on how to negotiate their way through the Police State of America. For more check out TDV Homegrown where Slavey is a regular contributor.
Posted by CoyotePrime at 2:00 PM