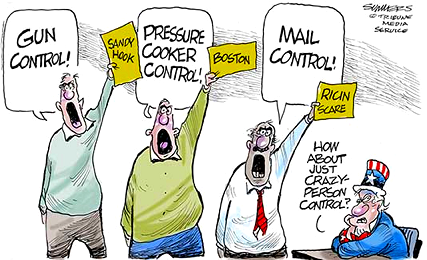 “Video and photos are now released, and suspects in the Boston Marathon bombing case are being hunted down. They will be in custody soon, if not already. My prayers go out to family members who lost lives and limbs in the blast. This is being politicized  to blame and demonize everything from the NRA to Republicans and even the sequester cuts. I hope this is not yet another excuse to take away more freedoms from Americans in the name of safety.

North Korea, once again, made more threats against South Korea by saying an attack can “start without notice.” I think the “notice” has already been given many times in the last few weeks. I hope the recent bombings in Boston and explosion in Texas (at a fertilizer plant) does not distract our military and leaders from dire global situations that can turn into war.

Meanwhile, just across Syria’s Southern border, more U.S. troops are going to be deployed in Jordan.  It is not a large amount, but they are coming from Fort Bliss, Texas, home of the 1st Armored Division. That means they come with military hardware such as tanks, which bring significant firepower. It adds to U.S. forces already in the kingdom. They are being sent there to contain the Syrian conflict. Secretary of Defense Chuck Hagel says military action is an option, but “an option of last resort.”

Gold had its worst drop in 30 years this week, but don’t be fooled into thinking gold is finished. Reports are coming in from around the globe that physical demand for gold and silver is extreme. The U.S. Mint sold 63,000 ounces of gold in just one day—a record. Most people see the price drop in gold as a contrived event. Dennis Gartman of the famed Gartman Letter says that kind of sell-off is so extreme that it only happens once in every 5,000 years. There are many reports of short supply, and prices are on the rebound because everybody is demanding gold and silver in hand.

The background checks in the Senate failed this week. It was a blow to the President’s gun control agenda.  Even Senate Majority Leader Harry Reid voted “No.” It strikes me odd that with all the enormous crime being perpetrated by the big banks, the President is going after guns.  There has not been a single big banker prosecuted for enormous financial crime. Now, the government (AG Eric Holder) is saying they can’t prosecute because it would collapse the financial system.  Former bank regulator and economics and law Professor William Black says that’s “ludicrous.” Black said this week on USAWatchdog.com that “felons are in charge of our largest financial institutions.” Google the term “foreclosure suicide,” and you will find people have been killing themselves because they are losing their homes. I do not know how many, but there is definitely blood on the hands of our biggest bankers.

Join Greg Hunter as he gives his analysis of these stories and more.“
- http://usawatchdog.com/
Posted by CoyotePrime at 10:13 AM