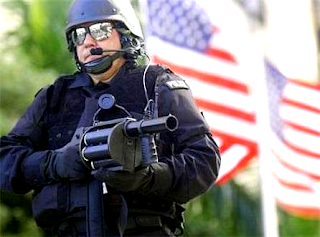 "President Obama's National Defense Resources Preparedness Executive Order of March 16 does to the country as a whole what the 2012 National Defense Authorization Act did to the Constitution in particular- completely eviscerates any due process or judicial oversight for any action by the Government deemed in the interest of "national security." Like the NDAA, the new Executive Order puts the government completely above the law, which, in a democracy, is never supposed to happen. The United States is essentially now under martial law without the exigencies of a national emergency.

Even as the 2012 NDAA was rooted in the Patriot Act and the various executive orders and Congressional bills that ensued to broaden executive power in the "war on terror," so the new Executive Order is rooted in the Defense Production Act of 1950 which gave the Government powers to mobilize national resources in the event of national emergencies, except now virtually every aspect of American life falls under ultimate unchallengeable government control, to be exercised by the president and his secretaries at their discretion.

The 2012 NDAA deemed the United States a "battlefield," as Senator Lindsey Graham put it, and gave the president and his agents the right to seize and arrest any U.S. citizen, detain them indefinitely without charge or trial, and do so only on suspicion, without any judicial oversight or due process. The new Executive Order states that the president and his secretaries have the authority to commandeer all U.S. domestic resources, including food and water, as well as seize all energy and transportation infrastructure inside the borders of the United States. The Government can also forcibly draft U.S. citizens into the military and force U.S. citizens to fulfill "labor requirements" for the purposes of "national defense." There is not even any Congressional oversight allowed, only briefings.

In the NDAA, only the president had the authority to abrogate legitimate freedoms of U.S. citizens. What is extraordinary in the new Executive Order is that this supreme power is designated through the president to the secretaries that run the Government itself:

The Executive Order even stipulates that in the event of conflict between the secretaries in using these powers, the president will determine the resolution through his national security team.

The 2012 NDAA gave the Government the right to abrogate any due process against a U.S. citizen. The new Executive Order gives the government, through the Secretary of Labor, the right to proactively mobilize U.S. citizens for "labor" as the government deems necessary and to coordinate with the Secretary of Defense to maintain data to coordinate the nation's work needs in relation to national defense.

What is extraordinary about the Executive Order is that, like the NDAA, this can all be done in peacetime without any national emergency to justify it. The language of the Order does not state that all these extraordinary measures will be done in the event of "national security" or a "national emergency." They can simply be done for "purposes of national defense," clearly a broader remit that allows the government to do what it wants, when it wants, how it wants, to whomever it wants, all without any judicial restraint or due process. As Orwell famously said in 1984, "War is peace. Peace is war." This is now the reality on the ground in America.

Finally, the 2012 NDAA was hurried through the House and Senate almost like a covert op with minimal public attention or debate. It was then signed by the president at 9:00 PM on New Year's Eve while virtually nobody was paying attention to much other than the approaching new year. This new Executive Order was written and signed in complete secret and then quietly released by the White House on its website without comment. All this was done under a president who studied constitutional law at Harvard.

It is hard to know what to say in the face of such egregious disregard for the integrity of what America has stood and fought for since its founding. It is hard in part because none of us thought such encroachments would ever happen here, certainly not under the watch of a "progressive" like Obama.

At one level, the prospect for war with Iran is probably an immediate justification. But the comprehensiveness of the Executive Order, like that of the 2012 NDAA, speaks to something much deeper, more sinister. I would suggest that this Order, like the NDAA, has been in the works for some time and is simply the next step in the logic of the "global war on terror." Our political elites have come to consider democracy an impediment to effective governance and they are slowly and painstakingly creating all the democratic legalities necessary to abridge our democratic rights with impunity, all to ensure our "security." Of such measures do republics fall and by such measures tyrants emerge.

The only thing that really remains is the occasion to test the new rules of the game. Perhaps that will be war with Iran, perhaps some contrived emergency, or perhaps, as long as the public and media remain asleep, no occasion will be necessary at all. It will just slowly happen of its own accord and we, like the frog in the pot of slowly boiling water, will just sit there and be consumed by our own turpitude.”
- http://www.huffingtonpost.com/
Posted by CoyotePrime at 9:46 AM