“Off to See the Wizard” 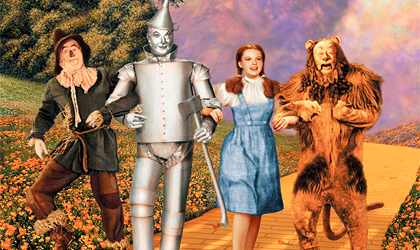 “Off to See the Wizard”
by Byron King

“Author Lyman Frank Baum wrote the original book, “The Wonderful Wizard of Oz”. The book, published in 1900, was whimsical. But among other things, it poked fun and caricatured the gold and silver debate in the U.S. in the 1890s. More broadly, Wizard was an allegory about life and political populism in the U.S. in the 1890s. Author Baum had a keen eye for the gold-silver debate because he knew something about the subject. Baum was wealthy, and heir to serious family money that came from the 19th-century oil fields of Pennsylvania. So he took the idea of debased currency and ran with it.

Just look at just the title, “The Wonderful Wizard of… Oz”, where “Oz” stands for “ounces.” I’ve heard that in the real story, the “Emerald City” of Oz was a city of gold. (It became emerald when MGM Studios made the famous Depression-era movie in 1939.) The yellow brick road was a metaphor for gold. Dorothy’s slippers were silver in the book, and changed to ruby in the movie.

The Tin Woodman stood for the urban workers of America, who were left out in the cold and rain by the forces of banker capitalism. The Scarecrow stood for the farmers- and recall that he had no brain, because many East Coast snobs thought farmers were dumb hicks, ripe for the picking. The Cowardly Lion was a dead ringer for William Jennings Bryan, who made good speeches, but could not stand up to the entrenched big guys.

The Wizard was all smoke and mirrors, reflecting the political classes as a bunch of charlatans who promised much and delivered little.

Hey, “Wizard” is a children’s story. It’s not a cookbook for what ails us today. If there are any real answers in the “Wizard book”, it’s along the lines that things aren’t what they may at first appear. And the common people- workers and farmers- are smarter and nobler than the elites think.”
- http://dailyresourcehunter.com/
Posted by CoyotePrime at 6:22 PM