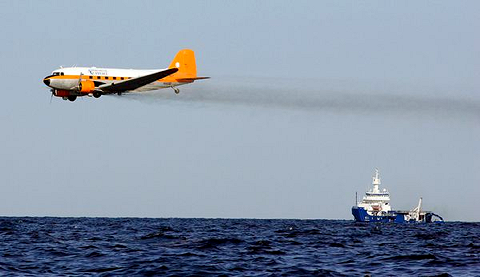 "Not only is the chemical dispersant that was used to "clean up" the Deepwater Horizon oil disaster of 2010 extremely dangerous, it was knowingly used to make the gushing oil merely "appear invisible" all the while exacerbating levels of toxicity in the Gulf waters, according to a report released Friday, the eve of the third anniversary of the Deepwater Horizon disaster, by the Government Accountability Project. According to the report, "Deadly Dispersants in the Gulf: Are Public Health and Environmental Tragedies the New Norm for Oil Spill Cleanups?", Corexit—the dispersant chemical dumped into the Gulf of Mexico by oil giant BP and the U.S. government in the spill's aftermath—was widely applied "because it caused the false impression that the oil disappeared."

"This report is a people's history to rebut a false advertising blitz by BP, enabled by government collusion." —Tom Devine. Government Accountability ProjectAs GAP states: "In reality, the oil/Corexit mixture became less visible, yet much more toxic than the oil alone. Nonetheless, indications are that both BP and the government were pleased with what Corexit accomplished." The Corexit/oil combination is highly toxic and will continue to cause "devastating long-term effects on human health and the Gulf of Mexico ecosystem" for a long time into the future, the report warns.

GAP spent 20 months collecting evidence from "over two dozen employee and citizen whistleblowers who experienced the cleanup's effects firsthand," and from extensive Freedom of Information Act (FOIA) requests. "This report is a people's history to rebut a false advertising blitz by BP, enabled by government collusion," stated GAP Legal Director Tom Devine, co-author of the report.  "Gulf workers and residents who are still suffering deserve justice, and the public deserves the truth."

"The price for making the spill appear invisible has been deadly," he said. "It is time to stop covering up the truth about the deadly effects of the chemical cover-up Corexit. Taken together, the documents and the witnesses' testimony belie repeated corporate and government rhetoric that Corexit is not dangerous. Worse than this, evidence suggests that the cleanup effort has been more destructive to human health and the environment than the spill itself," the group stated Friday.

The report includes first hand accounts from cleanup workers, divers, local doctors, and residents. The findings also include "higher than normal frequency of seafood mutations," and "pockets of 'dead' ocean areas where life was previously abundant." "Through their testimony and emerging science, the truth about the spill response's toxic legacy is beginning to surface as the third anniversary of the Deepwater Horizon explosion approaches," GAP stated.

Below is a small selection of some of the voices included in the report:

"As an environmental scientist, I look at the way the government and BP are handling, describing and discussing the spill … [T]he government did not account for the increased toxicity of the combined oil and Corexit.
– Scott Porter, Diver, Marine Biologist

"When a BP representative came up on the speedboat and asked if we need anything, I again explained my concerns about breathing in the Corexit and asked him for a respirator... He explained 'If you wear a respirator, it is bringing attention to yourself because no one else is wearing respirators, and you can get fired for that.' – Jorey Danos, Cleanup Worker

"What brought all of these individuals into the same pool was the fact that their symptoms were almost identical, and were different from anything that I had ever observed in my 40 plus years as a physician. However, until people are educated about the symptoms associated with exposure to toxic waste from the spill, we cannot assume they will make the connection. I continue to witness this disconnect and these symptoms on a daily basis." – Dr. Michael Robichaux, Physician

"They hired people from all over who didn't know about the conditions and real safety hazards, but you did what you had to do; you had to take the job and deal with it because you didn't have money to go home. There was a safety culture of, 'hush hush, it didn’t happen.'
– Anonymous Cleanup Worker

"EPA and BP knew of the health impacts associated with Corexit and oil. The issue was responding to an oil spill of this magnitude, with unprecedented quantities of Corexit, including novel subsurface application. Gulf coastal communities, and individuals who consume gulf seafood or recreate in the gulf, are the guinea pigs left to deal with the consequences and will be feeling the full effect in years to come." – Dr. Wilma Subra, Chemist, MacArthur Genius Award Recipient
Read the full report here:
- http://www.whistleblower.org/program-areas/public-health/corexit