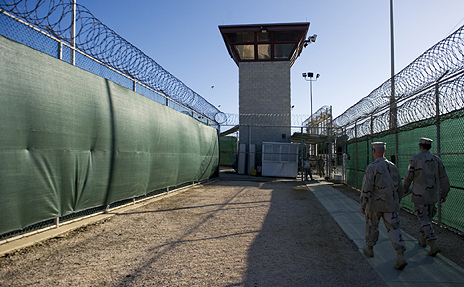 GUANTÁNAMO BAY, CUBA (The Borowitz Report)— “While former Presidents and a star-studded cast of other dignitaries gather in Dallas, Texas, today for the dedication of the George W. Bush Presidential Library and Museum, the first library opened by Mr. Bush, located in Guantánamo, Cuba, celebrated its eleventh anniversary in January with considerably less pomp. And for Harland Dorrinson, who curates Mr. Bush’s other library, the lack of attention stings.

“We’re actually the first George W. Bush library, if anybody cares to know,” Mr. Dorrinson said, adding that “no media whatsoever” covered the Guantánamo library’s eleventh anniversary. “They say that millions of people are going to visit the George W. Bush Library in Dallas every year,” he said. “On a good day, we’re lucky if we see one or two C.I.A. guys in between interrogations, looking for a Tom Clancy novel.” While Mr. Dorrinson said that he doesn’t expect his library to get the kind of attention likely to be enjoyed by its fancier counterpart in Dallas “any time soon,” he calls the absence of recognition “hurtful.”

“It seems like there was a lot of excitement about this place when we opened in 2002,” he said. “When was the last time you heard anyone in Washington even say the word ‘Guantánamo?’” That’s a shame, he added, because the library at Guantánamo has a lot to offer that the George W. Bush Presidential Library and Museum in Dallas doesn’t: “If you go to their Web site, you see that they’re closed some days. We’re going to be open forever.”