Satire: “No Information Found On CNN” 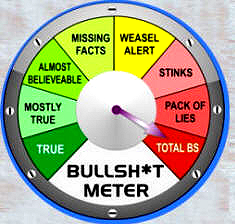 “No Information Found On CNN”
by Andy Borowitz

BOSTON (The Borowitz Report)— “Authorities who have spent the past forty-eight hours combing CNN in the hopes of finding any information whatsoever have called off their search, they confirmed today. “After monitoring every minute of CNN’s broadcast since Monday, we have found hearsay, rumors, falsehoods, and a steady stream of inane commentary,” one authority said. “Everything but information.”

The announcement was the second black eye today for CNN, which earlier in the afternoon recanted all of its reporting dating back to mid-2009. Newly installed CNN chief Jeff Zucker acknowledged that the network had experienced “a rough patch” since he took over earlier this year, but added, “At least no one was watching.”
- http://www.newyorker.com/
Posted by CoyotePrime at 5:43 PM