Satire: “Republicans: Obama Must Take Action in Syria So We Can Criticize Action He Took in Syria” 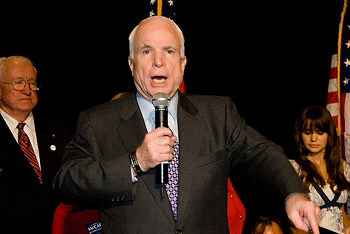 “Republicans: Obama Must Take Action in Syria So
We Can Criticize Action He Took in Syria”
by Andy Borowitz

WASHINGTON (The Borowitz Report)— "A growing chorus of Republican lawmakers are demanding that President Obama take some action in Syria so that they can attack whatever action he took in Syria. Appearing on CBS’s “Face the Nation” on Sunday, Sen. Lindsey Graham (R-South Carolina) laid out the situation in stark terms: “The time for President Obama to do something in Syria that we can eviscerate him for is long overdue.” Arguing that there are a variety of options available to Mr. Obama for dealing with Syria, Sen. Graham said, “The President needs to choose one of those options so that we can immediately identify it as a catastrophic choice and demand that he be impeached.”

Sen. John McCain (R-Arizona) used an appearance on NBC’s “Meet the Press” to express impatience with Mr. Obama’s “steadfast refusal to give us something new to rake him over the coals for.” “The American people have grown weary of my nonstop criticism of the President’s handling of Libya,” he said. “They are ready to hear me incessantly berate him for his handling of a different country.” At the end of his television appearance, Sen. McCain seemed to draw a line in the sand, making a direct challenge to Mr. Obama: “Mr. President, we are sick and tired of attacking you for your inaction. The time has come for us to attack you for your action.”
- http://www.newyorker.com/
Posted by CoyotePrime at 1:51 PM