“The Grandest Larceny of All Time” 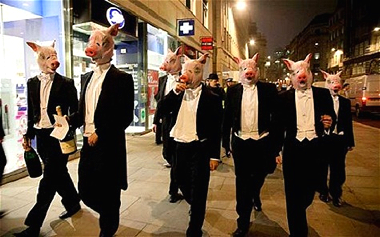 “The Grandest Larceny of All Time”
by Bill Bonner

“The biggest scandal of today's central bank policy is that it is essentially the grandest larceny of all time. The normal ways in which wealth is distributed may not be perfect, but they are the best nature can do. People earn it. They save it. They steal it. Or they get richer by investing. Or they just get lucky...

Normally, in other words, wealth ends up being distributed in an unplanned and uncontrolled way. People do their best. The chips fall where they may. But along come the central banks. They're creating a new type of wealth. It is not wage income. It is not the product of capital investments. It is not the result of technology or productivity increases or hard work or self-discipline... or any of the other things that lead to wealth and prosperity. Instead, it is created by the central bank "out of thin air."

This new wealth is not like the regular kind. These chips don't fall where they may; they get pushed around first. The Fed creates new money (not more wealth... just new money). This new money goes into the banking system, pretending to have the same value as the money that people worked for. And people with good connections to the banks take advantage of the cheap credit this new money creates to aid financial speculation. That's what we've been watching in the financial markets for the last four years.

From Chris Martenson at PeakProsperity.com: “The central plank of Bernanke's magic recovery plan has been to get everybody back borrowing, spending and "investing" in stocks, bonds and other financial assets. But not equally so, as he has been instrumental in distorting the landscape toward risky assets and away from safe harbors. That's why a two-year loan to the US government will net you only 0.22%, a rate that is far below even the official rate of inflation. In other words, loan the US government $10 million and you will receive just $22,000 per year for your efforts and lose wealth in the process because inflation reduced the value of your $10 million by $130,000 per year. After the two years are up, you are up $44,000 but out $260,000, for a net loss of $216,000.”

That wealth, or purchasing power, did not just vanish: It was taken by the process of inflation and transferred to someone else. But to whom did it go? Where do the chips come to rest? While the Fed punishes honest savers, stocks and bonds rise every time a hint of more money printing is announced. And the yacht sales continue to rise, too, as long as the Fed promises more.

Affluent households typically have their assets concentrated in stocks and other financial holdings, while less affluent households typically have their wealth more heavily concentrated in the value of their home. From the end of the recession in 2009 through 2011 (the last year for which Census Bureau wealth data are available), the 8 million households in the US with a net worth above $836,033 saw their aggregate wealth rise by an estimated $5.6 trillion, while the 111 million households with a net worth at or below that level saw their aggregate wealth decline by an estimated $0.6 trillion.”

There may be a "recovery" going on. But it is a recovery for the rich, not for the middle class.”