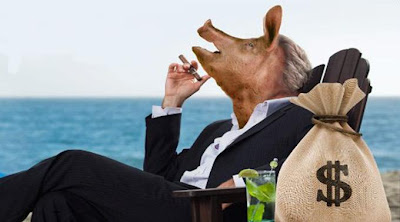 “The Incredibly Uneven Recovery:
Net worth of bottom 93 percent declines by $0.6 trillion
while top 7 percent net worth increases by $5.6 trillion.”
by mybudget360

"One unique signature of this economic recovery is how narrow it is. When we look at actual wealth, the net worth figures of Americans, we see some dismal numbers. In fact, what we find really isn’t a recovery at all if we look at 93 percent of the country. Then again, with most of Congress being millionaires they are so far removed from the real lives of the public that reality has become encapsulated in a very tiny bubble. One piece of data that recently came out highlights this uneven recovery. From 2009 to 2011, the heart of the so-called recovery, the net worth of Americans went up by $5 trillion. Sounds great right? Well, when the data is actually carefully examined we find out that the net worth of the bottom 93 percent of Americans actually fell by $0.6 trillion and the top 7 percent saw all the gains of $5.6 trillion.  In other words, for most Americans, this isn’t a recovery at all.
․ 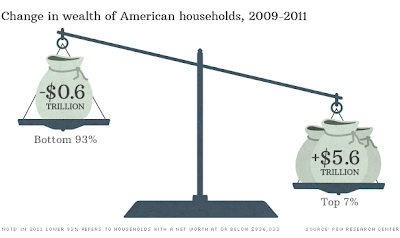 There is more mounting evidence that a modern day Gilded Age is in full effect: “(CNN Money) The dividing line between the two sides is $836,033 in 2011. The 8 million U.S. households with a net worth at or above that point got richer as America pulled out of its recession: Their average net worth rose by 28% from 2009 to 2011. Meanwhile, the 111 million remaining American households saw their wealth decline by 4%.

Why such a difference in fortunes? It’s because the rich are much more heavily invested in the stock and bond markets, which rallied during the recovery. Less affluent households typically have their wealth tied up in their homes, and the housing market remained flat between 2009 and 2011.” This is what we have discussed in prior articles. 1 out of 3 Americans have no savings so the stock market rally is merely a sideshow. Also, the vast majority of stock wealth is basically in the hands of the top 10 percent. The recent data highlights this even further. Most Americans derive their wealth from housing wealth: 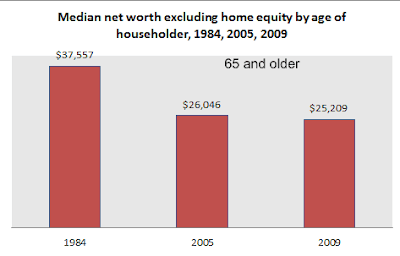 When we exclude home equity we realize that most Americans have very little stored in items outside of real estate.  What is more disturbing is how poorly younger Americans are doing:
․ 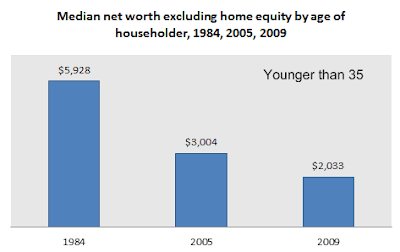 The median net worth for a household under 35 is around $2,000. How is this even remotely construed as being financially well off. One paycheck hiccup and people will be out on the streets. Many are. Of course, simply watching the mainstream press you are bombarded by advertising and a very inclusive circle that caters to small audience. They want Americans to keep spending money they don’t have on items they really don’t need. The real wealth continues to aggregate in a very small group. One way to see this rise in income inequality is through the Gini ratio: 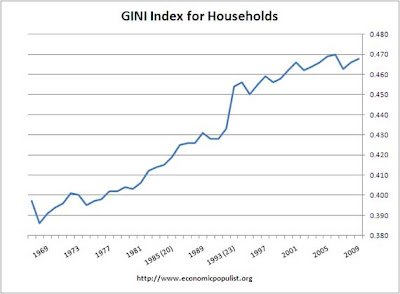 The data on this chart only goes to the 1960s but income inequality is now at levels last seen during the years prior to the Great Depression. The only reason you don’t see the mass upheaval is because we have 47 million Americans on food stamps. The unemployment rate keeps moving lower but a large reason for this is many Americans are simply dropping out of the labor force. The numbers are skewed. When you hear “a rise in household wealth of $5 trillion” most Americans think this is for everyone. The above data makes it very clear that it is not. The actual numbers paint a much more troubling picture:

Does the above look like an even recovery?  And now you have the Fed subsidizing big banks to enter the domain of average Americans and inflating housing bubbles all over the nation. Many of these new buyers are hiking rents up on households that have seen their wealth decline and incomes have gone stagnant over the years. In other words, the one tiny spot where Americans had some wealth is now being gobbled up by the financial sector and Fed.”
- http://www.mybudget360.com/
•
"You say you want a revolution, well, you know..."
- The Beatles
Posted by CoyotePrime at 3:53 PM

Email ThisBlogThis!Share to TwitterShare to FacebookShare to Pinterest
Labels: mybudget360