“The Wit and Wisdom of Will Rogers” 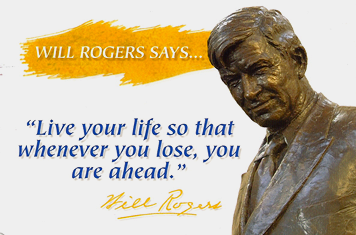 “The Wit and Wisdom of Will Rogers”
by Tom Purcell

"Things are mighty heated these days. Tempers are flaring and minds are closed. Here’s the solution: the wit and wisdom of Will Rogers.

“The short memory of voters is what keeps our politicians in office.”
“We’ve got the best politicians that money can buy.”
“A fool and his money are soon elected.”

Rogers spoke these words during the Great Depression, but they’re just as true today. With 24-hour news channels, our memories are shorter than ever. And in the mass-media age, the politician who can afford the most airtime frequently wins.

“Things in our country run in spite of government, not by aid of it.”
“Alexander Hamilton started the U.S. Treasury with nothing. That was the closest our country has ever been to being even.”
“Be thankful we’re not getting all the government we’re paying for.”

Today, unfortunately, we’re getting more government than we’re paying for. We cover the difference by borrowing billions every year. As the king of the velvet-tipped barb, Rogers never intended to be mean, but to bring us to our senses. One of his favorite subjects was to remind the political class that it worked for us, not the other way around.

“When Congress makes a joke it’s a law, and when they make a law, it’s a joke.”
“You can’t hardly find a law school in the country that don’t, through some inherent weakness, turn out a senator or congressman from time to time… if their rating is real low, even a president.”
“The more you observe politics, the more you’ve got to admit that each party is worse than the other.”

That’s for certain. I used to fault the Democrats for cronyism and reckless spending. But that was before Republicans took over. Rogers’ thinking on American foreign policy really hits home today:

“Diplomacy is the art of saying ‘Nice doggie’ until you can find a rock.”
“Diplomats are just as essential to starting a war as soldiers are for finishing it. You take diplomacy out of war, and the thing would fall flat in a week.”
“Liberty doesn’t work as well in practice as it does in speeches.”

Rogers was born and raised on a farm in Oklahoma. His wit reflected the heart of America — the horse sense, square dealing and honesty that were the bedrock of our success:

“When a fellow ain’t got much of a mind, it don’t take him long to make it up.”
“This country is not where it is today on account of any one man. It’s here on account of the real common sense of the Big Normal Majority.”

Franklin Roosevelt, a frequent target of Rogers’ barbs, understood how valuable Rogers’ sensibility was during the years of the Depression: “I doubt there is among us a more useful citizen than the one who holds the secret of banishing gloom… of supplanting desolation and despair with hope and courage. Above all things… Will Rogers brought his countrymen back to a sense of proportion.”

A sense of proportion is clearly what we’re lacking right now. We need to get it back quickly.
Not five years ago, we were attacked by people who hold an ideology we’re still having trouble getting our arms around. At first we were united, but now we’re badly divided. Nothing more brightens the day of those who wish us harm than division. Just as bad, we’ve got a rapidly aging population — a Social Security and Medicare train wreck is just over the horizon — and there is no shortage of other woes we must resolve if we expect the American experiment to keep on rolling. But instead of working to resolve our challenges, we snipe and point fingers and make absurd accusations. We forget we’re not Democrats or Republicans, but Americans.

What we need now more than ever is the calm, clear perspective of Will Rogers. He offered some sound advice on how we can get started: “If stupidity got us into this mess, then why can’t it get us out?”
- http://www.cagle.com/
Excerpt from: “Comical Sense: A Lone Humorist Takes on a World Gone Nutty!” by Tom Purcell
Posted by CoyotePrime at 4:47 PM