"Apple Is a Tax Dodger… You Should Be, Too" 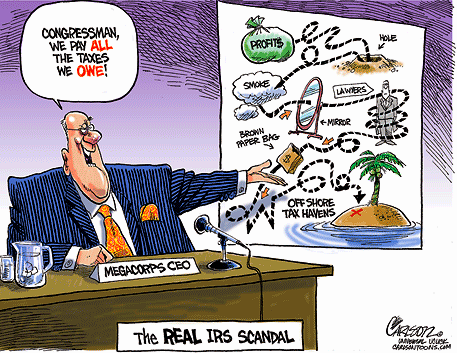 "Apple Is a Tax Dodger… You Should Be, Too"
by Alexander Green

“There was a collective gasp in some quarters last week when it was revealed that technology giant Apple avoided taxes on billions of dollars in offshore profits. CEO Tim Cook will almost certainly catch plenty of flak in the weeks ahead. But shareholders can breathe easy. Apple is unlikely to pay an extra cent in taxes. And you would be well advised to follow its example. Here’s why…

Apple did nothing illegal. It is simply playing the game that Congress created with the near-incomprehensible tax code. Hundreds of other multinational companies also use cost-sharing agreements to shift profits to a tax haven jurisdiction. They take advantage of tax law loopholes and use countries like Ireland as the base for offshore subsidies. (However, Apple did push the envelope a bit by having a subsidiary, Apple Operations International, with no employees or physical presence.)

This is exactly the sort of behavior you should expect with such a convoluted tax code. It may surprise you to learn that not even the Internal Revenue Service knows how long it is. Nina Olson, the national taxpayer advocate at the IRS, recently prepared an official report that turned up 3.7 million words. The number of words in the code has more than tripled since 1975. Since the beginning of 2001, there have been more than 4,000 changes to the tax code – an average of more than one a day. Politicians have learned that one of the best ways to retain incumbency is doling out tax favors to special interest groups.

Not even the best tax specialists in the country – and certainly none of our “misrepresentatives” in Congress who created it – can honestly claim to understand the entire code (which explains this interesting loophole we discovered). And so we struggle.

The IRS reports that U.S. taxpayers and businesses spend about 7.6 billion hours a year complying with the filing requirements of the Internal Revenue Code. More than 80% of individual taxpayers find the process of filing tax returns so overwhelming that they pay for help. This is a tremendous waste of time and money. Tax simplification would benefit all Americans, regardless of party affiliation. In the meantime, you have no choice but to play the game that Congress created. And that means doing everything in your power to keep your tax liabilities to an absolute minimum.

1. If you seek investment income, invest in municipal bonds. Interest payments are exempt from federal tax. And right now you face an unusual opportunity: Muni bonds yield more than Treasurys. This won’t last forever. Take advantage of it.
2. Minimize turnover in your non-retirement accounts. Taking gains on investments held less than a year means subjecting yourself to short-term capital gains taxes as high as 39.6%. Hold winners for at least a year, if possible. If you do, you’ll qualify for long-term capital gains treatment at the maximum rate of no more than 20%.
3. If you trade for short-term profits, it’s better to do it in your IRA or other qualified retirement plan. That way your short-term gains compound tax-deferred.
4. Before year-end, be sure to offset realized capital gains with capital losses. (You can buy the same securities back 30 days later.) And you can take up to $3,000 in additional losses against earned income.
5. Use your IRA, pension, 401(k) or other tax-deferred account to own corporate and Treasury bonds (since interest income is taxed at the same rate as earned income) and real estate investment trusts (since REIT dividends are taxed the same way). I call this your asset location strategy.
6. If you invest in mutual funds, use index funds rather than actively managed funds in your non-retirement accounts. Index funds are more tax-efficient because changes to the index are rare. Managed funds usually have high turnover and federal law requires them to distribute at least 98% of realized capital gains each year. That means you can get hit with a big capital gains distribution even when you haven’t sold a share – and even if the fund is down for the year. That hurts on April 15.

Occasionally, this strategy provokes anxiety from some investors who see tax-management strategies as some sort of abdication of their civic responsibilities. Not so.

The Morality of Taxes: You might feel, for instance, that low taxes cause deficits. Yet fiscally strapped countries in Europe have much higher tax rates than we do – and a VAT (value added tax) to boot. California is the biggest fiscal mess in this country and, not coincidentally, has the highest income and sales tax rates in the nation. Deficits everywhere are the result of unrestrained public spending, not citizens keeping too much of what they earn.

I’m not suggesting you do anything the least bit illegal or unethical. As a law-abiding citizen, you should pay all the taxes you are obligated to pay… but not one penny more. As Judge Learned Hand, who served for years as Chief Judge of the U.S. Court of Appeals for the Second Circuit, famously wrote: “Anyone may arrange his affairs so that his taxes shall be as low as possible; he is not bound to choose that pattern which best pays the Treasury. There is not even a patriotic duty to increase one’s taxes. Over and over again, the courts have said that there is nothing sinister in so arranging affairs as to keep taxes as low as possible. Everyone does it, rich and poor alike, and all do right, for nobody owes any public duty to pay more than the law demands.”

In short, taxes matter… a lot. Take the basic steps I’ve outlined here and – like Apple – you’re assured of higher real-world, after-tax returns. Market returns come and go. But taxes and expenses are forever.”
- http://www.marketoracle.co.uk/Article40600.html
Posted by CoyotePrime at 2:34 PM